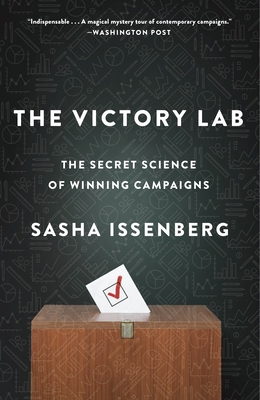 UPDATED FOR THE 2016 ELECTION

The book Politico calls “Moneyball for politics” shows how cutting-edge social science and analytics are reshaping the modern political campaign.

Renegade thinkers are crashing the gates of a venerable American institution, shoving aside its so-called wise men and replacing them with a radical new data-driven order. We’ve seen it in sports, and now in The Victory Lab, journalist Sasha Issenberg tells the hidden story of the analytical revolution upending the way political campaigns are run in the 21st century.
The Victory Lab follows the academics and maverick operatives rocking the war room and re-engineering a high-stakes industry previously run on little more than gut instinct and outdated assumptions. Armed with research from behavioural psychology and randomized experiments that treat voters as unwitting guinea pigs, the smartest campaigns now believe they know who you will vote for even before you do.  Issenberg tracks these fascinating techniques—which include cutting edge persuasion experiments, innovative ways to mobilize voters, heavily researched electioneering methods—and shows how our most important figures, such as Barack Obama and Mitt Romney, are putting them to use with surprising skill and alacrity.
Provocative, clear-eyed and energetically reported, The Victory Lab offers iconoclastic insights into political marketing, human decision-making, and the increasing power of analytics.

Praise For The Victory Lab: The Secret Science of Winning Campaigns…

SASHA ISSENBERG is a columnist for Slate and the Washington correspondent for Monocle.  He covered the 2008 election as a national political correspondent for The Boston Globe, and his work has also appeared in New York, The Atlantic, and The New York Times Magazine. His first book, The Sushi Economy, was published in 2007.
Loading...
or support indie stores by buying on
(This book is on backorder)