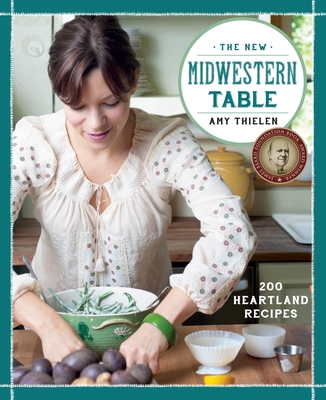 Amy Thielen grew up in rural northern Minnesota, waiting in lines for potluck buffets amid loops of smoked sausages from her uncle’s meat market and in the company of women who could put up jelly without a recipe. She spent years cooking in some of New York City’s best restaurants, but it took moving home in 2008 for her to rediscover the wealth and diversity of the Midwestern table, and to witness its reinvention.

The New Midwestern Table reveals all that she’s come to love—and learn—about the foods of her native Midwest, through updated classic recipes and numerous encounters with spirited home cooks and some of the region’s most passionate food producers. With 150 color photographs capturing these fresh-from-the-land dishes and the striking beauty of the terrain, this cookbook will cause any home cook to fall in love with the captivating flavors of the American heartland.

Praise For The New Midwestern Table: 200 Heartland Recipes: A Cookbook…

“The New Midwestern Table is a book to get excited about. Being more accustomed to regional Italian myself, it is simply wonderful to discover and become engaged in regional American cuisine. Amy’s Midwestern table is a richly woven tapestry of nature’s bounty, and a tale of the passionate love and gentle care that goes into its preparation. Finding yourself lost in the folds of this culinary story—filled with delicious recipes—is an exciting journey, and one I most certainly recommend.”
—Lidia Bastianich

“We read Amy Thielen’s work with the same excitement that readers from outside the South must have felt upon first encountering Edna Lewis and Bill Neal in the 1970s and 1980s, when they learned that Southern cooking was diverse, deeply rooted in the landscape, and compelling. The New Midwestern Table marks the debut of a major new voice in American cooking.”
—Matt Lee and Ted Lee

“Amy Thielen’s beautiful book honors a cuisine that is all too often ignored or disrespected by bicoastal trend seekers: heartland fare that is nourishing in all sorts of ways. To cook from this book is to partake of precious national tradition. To eat from it is to savor food unique to America, with roots all around the world. For the Lace Potato Pancakes recipe alone, The New Midwestern Table earns a prominent place on our shelf of favorites.”
—Jane and Michael Stern

“Amy allows us all to see our American culinary history through the eyes of an experienced, talented, and hungry, contemporary chef. She uses her training and imagination to recognize the full potential of her native Midwestern landscape highlighted with delicious foods, flavorful family traditions, excellent producers, and a society eager to reconnect with a distinctive, regional dining culture.”
—Michael Anthony

“Thielen has done the impossible, breaking new ground on a well-worn food meme. Like finding the perfect new leather coat that looks like gramps wore it for decades, she has channeled a seemingly brilliant incongruity. In hybridizing her northern prairie–übercool grandma meets modernist-craftsman gastronaut, she has defined the food of our ‘place’ in a way that’s never been done before. Beautifully written, culturally meaningful, and loaded with brilliant cookery, The New Midwestern Table dances on a wire with one foot in the twenty-first century and the other in the nineteenth.”
—Andrew Zimmern

"I’m biased on the Midwestern book, as it’s my home turf, but the Minnesotan Thielen, who logged serious years as a cook and chef at some of the best restaurants in Manhattan until she began a family, brings new life to recipes that are so at home in this part of America, dishes featuring our lake fish and our abundant venison, and vibrant takes on pot roasts and meat pies, recipes from simple salads to more elaborate preparations for headcheese and red current jelly."
--Michael Ruhlman

AMY THIELEN is the author of the James Beard Award-winning cookbook The New Midwestern Table and the host of Heartland Table on Food Network. A former New York City line cook, she now speaks and writes about home cooking for radio, television, and magazines, including Saveur, where she’s a contributing editor. She lives with her husband, visual artist Aaron Spangler, their son, his dog, and a bunch of chickens, in rural Park Rapids, Minnesota.
or support indie stores by buying on