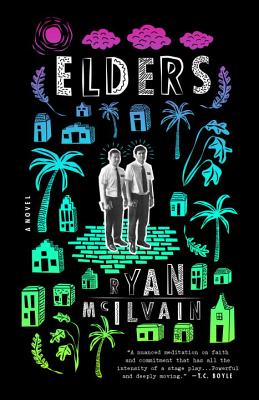 Elder McLeod—outspoken, surly, and skeptical—is nearing the end of his mission in Brazil. For nearly two years he has spent his days studying the Bible and the Book of Mormon, knocking on doors, and teaching missionary lessons. His new partner is Elder Passos, a devout, ambitious Brazilian leaning hard on the salvation he recently found in the church after his mother’s early death. The two young men are initially suspicious of each other, their work together at first frustrating and fruitless, their burgeoning friendship tenuous. So when a beautiful woman and her husband invite them in and offer them a chance to share their teachings, the Elders’ practice is at once put to good use, testing the mettle of their faith and their patience as partners. Before they can bring the couple to baptism, Elder McLeod and Elder Passos must confront their own long-held beliefs and doubts, and finally face the simmering tensions at the heart of their camaraderie.

Unsparingly honest and beautifully written, Elders is by turns a compelling portrait of a friendship in the balance and a poignant reflection on the binding nature of faith.

Praise For Elders: A Novel…

“Admits readers to a kind of inner sanctum. . . . McIlvain zeros in on the inner struggle, exploring the appeal of faith and the sorrow that comes with losing it."
—New York Times

“Glows with the love and anger of a former believer. . . . Clear-eyed. . . . Finely paced, keenly observed, and ruefully honest.” —Boston Globe

"[A] classic in Mormon letters. . . . Excellent, Mormon-themed novels are few and far between. This is one of them.”—The Daily Beast

“McIlvain dissects the mix of need and ambition and genuine faith that fuel a disciplined devotion. . . . Earthbound. . . . Honest. . . . Builds to [a] drastic resolution.” —Slate

“Elders is a refreshingly earnest, clear-eyed, and self-assured debut by a young writer to watch. McIlvain wrestles with sturdy themes, conflicted characters, and big ideas—the stuff of classic literature.  —Jonathan Evison, author of West of Here

“I’ve always wanted to read a novel about Mormon missions abroad, and McIlvain is the ideal writer to write it.  The framework he provides is layered and fascinating, and inside it, the complex human drama plays out beautifully—these are memorable characters, and McIlvain shows them to us with compassion and honesty both.”
—Aimee Bender, author of The Particular Sadness of Lemon Cake

“Ryan McIlvain’s beautifully written first novel takes the reader inside a quest: the coming-of-age mission expected of young male Mormons. Elders reveals a world of self-denial, proselytizing and passionate faith very differently experienced by a young American and his Brazilian counterpart.  For one, to succeed is to turn away; for the other, faith is survival itself.  Elders, “seeking one star in a million, a golden elect,” arrives at the perfect moment.” —Jayne Anne Phillips, author of Lark & Termite

“A nuanced meditation on faith and commitment that has all the intensity of a stage play.  Elders is a powerful and deeply moving debut from a gifted young writer.” —T.C. Boyle, author of San Miguel

“A thoughtful, carefully wrought story about the voids between belief and questioning, between loneliness and companionship, between home and far, far away.” —Ramona Ausubel, author of No One Is Here Except All of Us

“In graceful, deft prose, Elders explores how two very young men cope with the serious task they are charged to perform, and the close quarters they must share. Every sentence counts as the novel tracks their fraught intimacy, their sincere efforts, their doubts, their disappointments. This is a wise book about the strength of human relationships under the pressure of challenged faith. Ryan McIlvain offers the reader genuine hope.” —Alice Elliot Dark, author of In the Gloaming

“With strong, economical language, Ryan McIlvain has crafted a terrific story.  From exotic Brazil to an even stranger America.  These characters are presented fully and with great affection.  I'm certain this is the first of many fine works from an important new voice.” —Percival Everett, author of Percival Everett by Virgil Russell

RYAN MCILVAIN grew up in the Mormon Church and resigned his membership in his mid-twenties. His writing has appeared in many journals, including The Paris Review. A former Stegner Fellow at Stanford, he currently lives with his wife in Los Angeles.