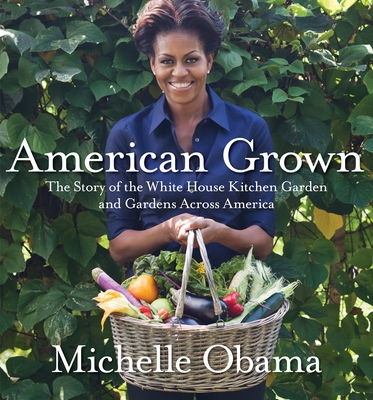 #1 NEW YORK TIMES BESTSELLER • The former First Lady, author of Becoming, and producer and star of Waffles + Mochi tells the inspirational story of the White House Kitchen Garden and how gardens can transform our lives and the health of our communities.

Early in her tenure as First Lady, despite being a novice gardener, Michelle Obama planted a kitchen garden on the White House’s South Lawn. To her delight, she watched as fresh vegetables, fruit, and herbs sprouted from the ground. Soon the White House Kitchen Garden inspired a new conversation all across the country about the food we feed our families and the impact it has on the nutrition and well-being of our children.

In American Grown, Mrs. Obama invites you inside the White House Kitchen Garden, from the first planting to the satisfaction of the seasonal harvest. She reveals her early worries and struggles—would the new plants even grow?—and her joy as lettuce, corn, tomatoes, collards and kale, sweet potatoes and rhubarb flourished in the freshly tilled soil. She shares the stories of other gardens that have moved and inspired her on her journey across the nation. And she offers what she learned about planting your own backyard, school, or community garden.

American Grown features:
• a behind-the-scenes look at every season of the garden’s growth
• unique recipes created by White House chefs
• striking original photographs that bring the White House garden to life
• a fascinating history of community gardens in the United States

From a modern-day vegetable truck that brings fresh produce to underserved communities in Chicago, to Houston office workers who make the sidewalk bloom, to a New York City school that created a scented garden for the visually impaired, to a garden in Winston-Salem, North Carolina, that devotes its entire harvest to those less fortunate, American Grown isn’t just the story of a single garden. It’s a celebration of the bounty of our nation and a reminder of what we can all grow together.

Michelle Obama served as First Lady of the United States from 2009 to 2017. A graduate of Princeton University and Harvard Law School, Mrs. Obama started her career as an attorney at the Chicago law firm Sidley & Austin, where she met her future husband, Barack Obama. She later worked in the Chicago mayor’s office, at the University of Chicago, and at the University of Chicago Medical Center. Mrs. Obama also founded the Chicago chapter of Public Allies, an organization that prepares young people for careers in public service. She is the author of the #1 global bestseller Becoming and the #1 national bestseller American Grown. The Obamas currently live in Washington, D.C., and have two daughters, Malia and Sasha.