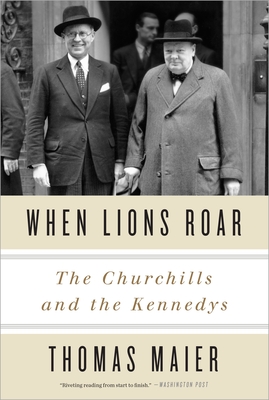 When Lions Roar begins in the mid-1930s at Chartwell, Winston Churchill's country estate, with new revelations surrounding a secret business deal orchestrated by Joseph P. Kennedy, the soon-to-be American ambassador to Great Britain and the father of future American president John F. Kennedy. From London to America, these two powerful families shared an ever-widening circle of friends, lovers, and political associates – soon shattered by World War II, spying, sexual infidelity, and the tragic deaths of JFK's sister Kathleen and his older brother Joe Jr.  By the 1960s and JFK's presidency, the Churchills and the Kennedys had overcome their bitter differences and helped to define the “greatness” in each other.

Acclaimed biographer Thomas Maier tells this dynastic saga through fathers and their sons – and the remarkable women in their lives – providing keen insight into the Churchill and Kennedy families and the profound forces of duty, loyalty, courage and ambition that shaped them. He explores the seismic impact of Winston Churchill on JFK and American policy, wrestling anew with the legacy of two titans of the twentieth century. Maier also delves deeply into the conflicted bond between Winston and his son, Randolph, and the contrasting example of patriarch Joe Kennedy, a failed politician who successfully channeled his personal ambitions to his children. By approaching these iconic figures from a new perspective, Maier not only illuminates the intricacies of this all-important cross-Atlantic allegiance but also enriches our understanding of the tumultuous time in which they lived and the world events they so greatly influenced.

With deeply human portraits of these flawed but larger-than-life figures, When Lions Roar explores the “special relationship” between the Churchills and Kennedys, and between Great Britain and the United States, highlighting all of its emotional complexity and historic significance.

THOMAS MAIER is the author of four books, including The Kennedys: America’s Emerald Kings and Masters of Sex, the basis for the Showtime series.

Praise For When Lions Roar: The Churchills and the Kennedys…

“[Maier] delivers the goods. Weaving the life stories of nearly 30 Churchills and Kennedys into a seamless narrative, Maier smartly anchors his reportage on the clans’ larger-than-life cornerstones: Winston Churchill and Joseph Kennedy. The sheer accumulation of colorful anecdotes in When Lions Roar makes for riveting reading from start to finish.” –Washington Post

“A captivating chronicle of the surprisingly many ways that Winston Churchill and Joseph P. Kennedy (and their progeny) crossed paths (and swords) over the course of the 20th century...What Maier beautifully factors in is the effect of these struggles on the children. When Lions Roar zeroes in on Kennedy's eldest two boys – the doomed, fair-haired Joe, Jr., who echoed all of his father's repugnant views, and the invalid Jack, who ultimately escaped them – pointedly contrasting Kennedy's loving, dutiful, dominated scions with Churchill and his only son, the gifted, yet agonizingly self-destructive Randolph... Laden with significant new research, the book offers up many intriguing tangential revelations about virtually everybody... Ultimately, however, he succeeds at what matters most: bringing to life Kennedy and Churchill's fatal differences and fascinating similarities.” –USA Today

“What I like most in Maier's giant work is the spine of this saga, the all-important record of influence the great soldier-statesman-historian's life exerted on the future American president.” –Chris Matthews, host of MSNBC's Hardball

“Thomas Maier tapped into the mother lode when he chose to wrap Winston Churchill and Joseph P. Kennedy, along with their families and extended circle of famous friends, into the same volume. The twisted and convulsive lives of their numerous progeny, most of them strong-willed and fiercely independent, make the fictitious escapades of Downton Abbey look like Disney World...Maier’s book is a near-perfect mix of politics, business, world chaos and bedroom gossip, and even the gossip is documented with the thoroughness of a master investigator...Whether your preference in books revolves around the corridors of the rich and powerful, or the elegant hotels and darkened guest rooms of the famous, you’ll find this one very hard to put down.” –Buffalo News

“A thoroughly told and fascinatingly detailed account of the Churchill and Kennedy families that brims with revelation and showcases the dynamic relationship between these roaring dynasties.” –Irish America magazine

“A well-researched historical masterpiece...When Lions Roar is a length but masterful dual biography and a genuine tribute to the two families whose public and private lives became intertwined.” –BookReporter.com

“Two of the most notable names in 20th-century history are Churchill and Kennedy. In this fascinating dual biography of Winston Churchill (1874–1965) and Joseph Kennedy (1888–1969), Maier (The Kennedys: America's Emerald Kings) describes not only both men's impact on politics but also the intertwined lives of their families over the course of four decades. Kennedy managed to obtain an appointment as U.S. ambassador to Great Britain in the early 1930s, where he struck up an acquaintance with Churchill, recently excluded from office because of his opposition to India's independence. In subsequent years, the relationship between the two men waxed and waned and eventually broadened to include Churchill's son, Randolph, as well as Kennedy's son Jack. Maier delves into archives on both sides of the Atlantic to bring to his narrative an impressive grasp of the two clans and the rich array of personalities that interacted with them over the decades. This is a book that cannot be put down, and its wealth of details, smoothly told, will hold the reader's attention from beginning to end. An excellent work for all history collections, especially those devoted to 20th-century political history.”—Library Journal

“A sprawling yet intimate panorama of two famous political dynasties.”–Booklist

“Writing a biography of an individual can become beset with difficulties. Writing a multicharacter history of both the Churchills and the Kennedys, covering primarily the 1930s through the 1960s, involves an almost unimaginably high degree of difficulty. Maier's cast of characters includes 14 Churchill family members and 15 Kennedy family members... Most pleasing is Maier's skill at locating information about less famous individuals who played key roles in the ways the two families connected and disconnected… his research carries the book along as interesting anecdotes continue to emerge.”–Kirkus Reviews

“A highly enjoyable and expertly told account of two of the most important political families of the twentieth century.” –Richard Toye, author of Churchill’s Empire: The World that Made Him and the World He Made

“Many great personalities appear to history in cutout. Thomas Maier reminds us that few of them succeed outside an intricate network of public and private relationships, beginning with their families. In weaving together the stories of these two, Maier has made the best sort of collective biography: expansive, intimate, captivating and, evidently, a labor of love.” –Ken Weisbrode, author of Churchill and the King: The Wartime Alliance of Winston Churchill and George VI

“Thomas Maier has achieved the remarkable feat of offering rich new insight into the lives, achievements, and failures of two famous families, the Churchills and the Kennedys. If you think you know everything there is to know about the Churchills and Kennedys, you’re wrong. Maier examines his subjects as no biographer has before. It is a monumental accomplishment.” –Terry Golway, author of The Irish in America and Machine Made: Tammany Hall and the Creation of Modern American Politics

“Magisterial ... In this brilliant book, Thomas Maier probes the fateful relationship of two of the twentieth century's most remarkable political families. What sets this work apart is the author's unerring eye for the kind of vivid, overlooked detail that brings his extraordinary cast of characters to life. This is the very best kind of epic history.” –Kevin Peraino, author of Lincoln in the World: The Making of a Statesman and the Dawn of American Power
or
Buy Here
Copyright © 2020 American Booksellers Association