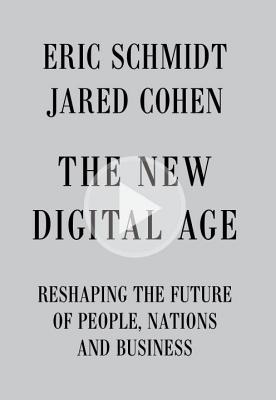 Reshaping the Future of People, Nations and Business

In an unparalleled collaboration, two leading global thinkers in technology and foreign affairs give us their widely anticipated, transformational vision of the future: a world where everyone is connected—a world full of challenges and benefits that are ours to meet and to harness.

Eric Schmidt is one of Silicon Valley’s great leaders, having taken Google from a small startup to one of the world’s most influential companies. Jared Cohen is the director of Google Ideas and a former adviser to secretaries of state Condoleezza Rice and Hillary Clinton. With their combined knowledge and experiences, the authors are uniquely positioned to take on some of the toughest questions about our future: Who will be more powerful in the future, the citizen or the state? Will technology make terrorism easier or harder to carry out? What is the relationship between privacy and security, and how much will we have to give up to be part of the new digital age?

In this groundbreaking book, Schmidt and Cohen combine observation and insight to outline the promise and peril awaiting us in the coming decades. At once pragmatic and inspirational, this is a forward-thinking account of where our world is headed and what this means for people, states and businesses.

With the confidence and clarity of visionaries, Schmidt and Cohen illustrate just how much we have to look forward to—and beware of—as the greatest information and technology revolution in human history continues to evolve. On individual, community and state levels, across every geographical and socioeconomic spectrum, they reveal the dramatic developments—good and bad—that will transform both our everyday lives and our understanding of self and society, as technology advances and our virtual identities become more and more fundamentally real.

As Schmidt and Cohen’s nuanced vision of the near future unfolds, an urban professional takes his driverless car to work, attends meetings via hologram and dispenses housekeeping robots by voice; a Congolese fisherwoman uses her smart phone to monitor market demand and coordinate sales (saving on costly refrigeration and preventing overfishing); the potential arises for “virtual statehood” and “Internet asylum” to liberate political dissidents and oppressed minorities, but also for tech-savvy autocracies (and perhaps democracies) to exploit their citizens’ mobile devices for ever more ubiquitous surveillance. Along the way, we meet a cadre of international figures—including Julian Assange—who explain their own visions of our technology-saturated future.

Inspiring, provocative and absorbing, The New Digital Age is a brilliant analysis of how our hyper-connected world will soon look, from two of our most prescient and informed public thinkers.

ERIC SCHMIDT is executive chairman of Google, where he served as chief executive officer from 2001 to 2011. A member of the President s Council of Advisors on Science and Technology, Schmidt also chairs the board of the New America Foundation and is a trustee of the Institute for Advanced Study in Princeton, New Jersey.

JARED COHEN is director of Google Ideas and an Adjunct Senior Fellow at the Council on Foreign Relations. He is a Rhodes Scholar and the author of several books, including "Children of Jihad "and "One Hundred Days of Silence. "He is a member of the Director s Advisory Board at the National Counterterrorism Center."

Praise For The New Digital Age: Reshaping the Future of People, Nations and Business…

“The New Digital Age is a considered work…It shifts the debate about technology, elevating it from mundane arguments about the utility of dating apps to the wider issues of how technology interacts with power.”
—The Economist

“This is the most important—and fascinating—book yet written about how the digital age will affect our world. With vivid examples and brilliant analysis, it shows how the internet and other communications technologies will empower individuals and transform the way nations and businesses operate. How will different societies make tradeoffs involving privacy, freedom, control, security, and the relationship between the physical and virtual worlds? This realistic but deeply optimistic book provides the guideposts. It’s both profoundly wise and wondrously readable.”
-Walter Isaacson, author of Steve Jobs

“Every day, technological innovations are giving people around the world new opportunities to shape their own destinies. In this fascinating book, Eric Schmidt and Jared Cohen draw upon their unique experiences to show us a future of rising incomes, growing participation, and a genuine sense of community—if we make the right choices today.”
-Bill Clinton

“Eric Schmidt and Jared Cohen have produced a searching meditation on technology and world order. Even those who disagree with some of their conclusions will learn much from this thought-provoking volume.”
-Henry A. Kissinger

“This is the book I have been waiting for: a concise and persuasive description of technology’s impact on war, peace, freedom, and diplomacy. The New Digital Age is a guide to the future written by two experts who possess a profound understanding of humanity’s altered prospects in a wireless world. There are insights on every page and surprising conclusions (and questions) in every chapter. For experts and casual readers alike, Eric Schmidt and Jared Cohen have produced an indispensable book.”
-Former U.S. secretary of state Madeleine Albright

“Jared Cohen and Eric Schmidt have written a brilliant book that should be required reading for anyone who wishes to understand the huge ramifications of the Age of Google not only for our lifestyles but, more importantly, for our privacy, our democracy and our security. If you already know about the law of photonics, data remanence, Stuxnet, Flame, DDoS attacks and CRASH (the Clean-Slate Design of Resilient, Adaptive, Secure Hosts) then you can probably skip it. If, like me, this is all news to you, you had better download The New Digital Age today. The 'technoptimistic' case will never be more smartly argued.”
-Niall Ferguson, author of Civilization: The West and the Rest

“The New Digital Age is must-reading for anyone who wants to truly understand the depths of the digital revolution. Combining the skills of a social scientist and a computer scientist, Schmidt and Cohen blend the technical and the human, the scientific and the political, in ways I rarely saw while in government. They challenge the reader’s imagination on almost every page.”
-General Michael Hayden, former director of the CIA

“This is a book that describes a technological revolution in the making. How we navigate it is a challenge for countries, communities and citizens. There are no two people better equipped to explain what it means than Eric Schmidt and Jared Cohen.”
-Tony Blair

“Few people in the world are doing more to imagine—and build—the new digital age than Eric Schmidt and Jared Cohen. With this book, they are looking into their crystal ball and inviting the world to peek in.”
-Michael R. Bloomberg

“Eric Schmidt and Jared Cohen’s thoughtful, well-researched work elucidates the staggering impact of technology on our daily lives, as well as what surprising and incredible developments the future may hold. Readers might be left with more questions than answers, but that’s the idea—we are at our best when we ask ‘What’s next?’”
-Elon Musk, cofounder of Tesla Motors and PayPal

“The New Digital Age offers an intriguing fusion of ideas and insights about how the virtual world is intersecting with the ‘Westphalian order.’ It seeks a balance between the discontinuities of technologists’ ‘revolutions’ and the traditionalism of internationalists’ study of states, power, and behavior. The authors explain that technology is not a panacea, yet the uses of technology can make a world of difference. This book should launch a valuable debate about the practical implications of this new connectivity for citizens and policy makers, societies and governments.”
-Robert B. Zoellick, former president of the World Bank Group

“We have long needed an incisive study of how the ever-evolving world of technology leaves almost no aspect of life unchanged. We have it in The New Digital Age. Eric Schmidt and Jared Cohen offer a rigorous approach to decoding what the future holds in a story that is as well written and entertaining as it is important.”
-General Brent Scowcroft, former National Security Advisor

“At last, a brilliant guide book for the next century—what the future holds for entrepreneurs, revolutionaries, politicians, and ordinary citizens alike. Schmidt and Cohen offer a dazzling glimpse into how the new digital revolution is changing our lives. This book is the most insightful exploration of our future world I’ve ever read, and once I started reading I was simply unable to put it down.”
-Sir Richard Branson, founder and chairman, Virgin Group

“This brilliant book will make you re-examine your concepts of the digital age, the way the world works, what lies ahead, and what all this means for you, your family and your community. A must read.”
—Mohamed El-Erian, chair, President Obama’s Global Development Council

“This work of futurology combines optimism and pessimism in an informed and level-headed presentation.”
—Booklist

“Ambitious [and] fascinating . . . [this] book is filled with tantalizing examples of futuristic goods and services.”
—Anna Kuchment, Scientific American

“[Schmidt and Cohen] encapsulate a vast sweep of ideas, including personal citizenship online and off, censorship of electronic information as national policy, and even what future revolutions will look like in years to come . . . A thoughtful and well-balanced prognostication of what lies ahead.”
—Kirkus Reviews