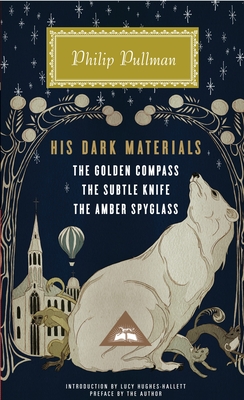 The only hardcover omnibus of the best-selling and award-winning fantasy trilogy.

Philip Pullman's trilogy is a masterpiece that transcends genre and appeals to readers of all ages. His heroine, Lyra, is an orphan living in a parallel universe in which science, theology, and magic are entwined. The epic story that takes us through the three novels is not only a spellbinding adventure featuring armored polar bears, magical devices, witches, and daemons, it is also an audacious and profound reimagining of Milton's Paradise Lost that has already inspired a number of serious books of literary criticism. Like J. R. R. Tolkien and C. S. Lewis before him, Pullman has invented a richly detailed and marvelously imagined world, complex and thought-provoking enough to enthrall adults as well as younger readers. An utterly entrancing blend of metaphysical speculation and bravura storytelling, His Dark Materials is a monumental and enduring achievement.