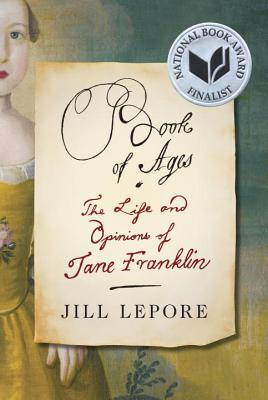 The Life and Opinions of Jane Franklin

From one of our most accomplished and widely admired historians, a revelatory portrait of Benjamin Franklin’s youngest sister and a history of history itself. Like her brother, Jane Franklin was a passionate reader, a gifted writer, and an astonishingly shrewd political commentator. Unlike him, she was a mother of twelve.

Benjamin Franklin, who wrote more letters to his sister than he wrote to anyone else, was the original American self-made man; his sister spent her life caring for her children. They left very different traces behind. Making use of an amazing cache of little-studied material, including documents, objects, and portraits only just discovered, Jill Lepore brings Jane Franklin to life in a way that illuminates not only this one woman but an entire world—a world usually lost to history. Lepore’s life of Jane Franklin, with its strikingly original vantage on her remarkable brother, is at once a wholly different account of the founding of the United States and one of the great untold stories of American history and letters: a life unknown.


Praise For Book of Ages: The Life and Opinions of Jane Franklin…

“By restoring Jane so vividly to the historical record, Lepore provides a fresh, personal perspective on Benjamin. And so extraordinarily demanding was her research, even the appendixes in Lepore’s vibrantly enlightening biography are dramatic….Lepore’s stature grows with each book, and this first telling of a remarkable American story, supported by a national tour and generous print run, is destined for an even greater readership.” —Donna Seaman, Booklist (starred review)

“New Yorker writer Lepore masterfully formulates the story of Benjamin Franklin’s youngest sister, who will be virtually unknown to many readers, using only a few of her letters and a small archive of births and deaths….Jane Franklin was an amazing woman who raised her children and grandchildren while still having the time to read and think for herself. We can only see into her mind because her correspondent was famous and because a vastly talented biographer reassembled her for us.” —Kirkus (starred review)

“This book is an important, inspiring portrait of a determined and faith-filled woman who just happened to be the sister of a big shot. It will be enjoyed by all.” —Library Journal (starred review)

“Jane Franklin’s indomitable voice and hungry, searching intellect shine through these pages; she will not be forgotten, and the world is richer for it.” —Time Magazine, Top 10 Nonfiction Books of the Year

“Luminous….Lepore gives us a woman in the flesh, with no hints and hedges about what she must, or might, have felt….Jane emerges as witty, curious, and resilient in the face of unimaginable grief, yet she is not an unsung hero of the revolution, a forgotten Abigail Adams. Her importance, as Lepore’s portrait memorably shows, lies in her ordinariness—her learning thwarted by circumstance, but her intelligence shaped by her uniquely female experience. We may know about Jane Franklin only because of her famous brother, but he is not why she matters.” —Joanna Scutts, Washington Post

“As she stitches together Jane’s story, Lepore gives us a side of Benjamin Franklin we have never seen—an evocative look at what life was like for most 18th-century women.” —Tina Jordan, Entertainment Weekly

“Book of Ages is the name of Lepore’s extraordinary new book about Jane Franklin, but to call it simply a biography would be like calling Ben’s experiments with electricity mere kite flying….The end product is thrilling—an example of how a gifted scholar and writer can lift the obscure out of silence. In so doing, Lepore enriches our sense of everyday life and relationships and conversational styles in Colonial America….The brilliance of Lepore’s book is that plain Jane’s story becomes every bit as gripping—and, in its own way, important—as Big Ben’s public triumphs.” —Maureen Corrigan, NPR

“In this beautifully written double biography, Lepore brings into focus not just the life of Jane Franklin Mecom, alongside that of her brother, but illuminates the dynamic era through which they lived and gives us a birds’-eye view of history from the vantage point of a powerless woman who grew up in a Boston family alongside one of the 18th century’s greatest authors, entrepreneurs, scientists and statesmen….Remarkably, in the end Jane’s story comes to life; we know her or at least about her. But, in fact, we know her because her life is one that we recognize, perhaps better than that of her familiar brother. That is the brilliance of this book….This lyrical and meditative book ranks familiarly as a history or biography, but is more than either….It descends historiographically from Laurel Thatcher Ulrich’s “A Midwife’s Tale” as a classic and enduring tribute to an obscure woman, only this one also had a famous brother.” —Edith B. Gelles, San Francisco Chronicle

“Ms. Lepore is a fantastic historian, and meticulous research brings this portrait to life….In the hands of a less accomplished writer, Jane Franklin might have appeared merely a pale shadow in contrast to her brother’s accomplishments. But the portrait that emerges here is both frank and astute, an observant witness to the time.” —Madeleine Schwartz, Pittsburgh Post-Gazette

“To stare at these siblings is to stare at sun and moon. But in Jill Lepore’s meticulously constructed biography, Book of Ages: The Life and Opinions of Jane Franklin, recently placed on the long list of nominees for the National Book Award in nonfiction, this moon casts a beguiling glow….Consistently first rate.” —Dwight Garner, The New York Times

“This book is a tour de force that can only evoke admiration.” —Priscilla S. Taylor, The Washington Times

“Go read Jill Lepore’s Book of Ages. A biography of Jane Franklin, Benjamin’s sister, it is simultaneously a fascinating look at early America, a meditation on one remarkable mind by another, and, implicitly, a biography of all the other Janes—history’s anonymous and overlooked women.” —Kathryn Schulz, New York Magazine

“It is uncanny how vividly personal, how vibrantly colored, Jane’s voice sounds from these pages….let’s call it genius.” —Melissa H. Pierson, The Barnes & Noble Review

“Book of Ages is an artful, serious, marvelous book. Lepore brings to it focus, intensity, and proud delight in her subject.” —Bob Blaisdell, The Christian Science Monitor

“A thoughtful and illuminating biography.” —O Magazine, “Ten Titles to Pick Up Now”

“This is a brilliant and delightful book! By weaving together the tales of Benjamin Franklin and his beloved little sister, Jill Lepore creates a richly-textured tapestry of life in early America. Deeply researched and passionately written, it brings us inside a poignant relationship between two lovable people who seemed so different but were also so connected. I devoured this book and will treasure it.” —Walter Isaacson, author of Steve Jobs

“Book of Ages is an ardently told life story, brimming with love and loss against a background of political strife and war. Jill Lepore opens a smeared casement on the life of Jane, Benjamin Franklin's gifted sister, confidante and life-long correspondent. While Benjamin was able to forge a path to greatness from his obscure beginnings, Jane, trapped by gender, starved of education, was not. The contrast between the two destinies is by turns captivating, enraging and profoundly moving. As Lepore sheds light on this one, unsung life, she brilliantly illuminates an entire era.” —Geraldine Brooks, author of March

“From scraps and whispers, Jill Lepore has resurrected Ben Franklin's youngest sister, the only relative who could truthfully say, "Every line from him was a pleasure."  The subject is tailor-made for Lepore, as artful a writer as she is exact a scholar.  She delivers two marvels at once:  An authentic 18th century female voice, cheerful, inquisitive, and saucy, as well as an intimate portrait of Jane Franklin's revered brother himself.” —Stacy Schiff, author of Cleopatra

“This poetic and powerful diptych takes readers on a fascinating journey. With consummate skill, Lepore moves us beyond the story of a famous brother and his woebegone sister, instead bringing both Benny and Jenny--and the relationship between them--to life. A book to ponder and prose to savor.”—Laurel Thatcher Ulrich, author of A Midwife’s Tale

"With careful and ingenious research, Jill Lepore uncovers the surprising life of the obscure sister to a very famous man. This eloquent book reveals two remarkable siblings and their intertwined and revolutionary lives." —Alan Taylor, author of The Civil War of 1812

Jill Lepore is the David Woods Kemper ’41 Professor of American History at Harvard University and a staff writer at The New Yorker. Her books include New York Burning, a finalist for the Pulitzer Prize; The Name of War, winner of the Bancroft Prize; and The Mansion of Happiness, which was short-listed for the 2013 Andrew Carnegie Medal for Excellence in Nonfiction. She lives in Cambridge, Massachusetts.
Loading...
or
Not Currently Available for Direct Purchase