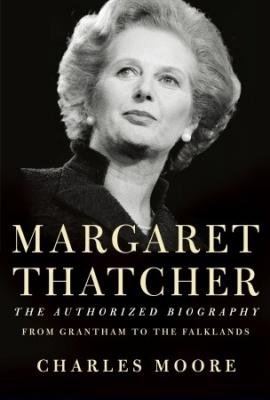 The Authorized Biography: From Grantham to the Falklands

With unequaled authority and dramatic detail, the first volume of Charles Moore's authorized biography of Margaret Thatcher reveals as never before the early life, rise to power, and first years as prime minister of the woman who transformed Britain and the world in the late twentieth century. Moore has had unique access to all of Thatcher's private and governmental papers, and interviewed her and her family extensively for this book. Many of her former colleagues and intimates have also shared previously unseen papers, diaries, and letters, and spoken frankly to him, knowing that what they revealed would not be published until after her death. The book immediately supersedes all other biographies and sheds much new light on the whole spectrum of British political life from Thatcher's entry into Parliament in 1959 to what was arguably the zenith of her power--victory in the Falklands in 1982.

Drawing on an extraordinary cache of letters to her sister Muriel, Moore illuminates Thatcher's youth, her relationship with her parents, and her early romantic attachments, including her first encounters with Denis Thatcher and their courtship and marriage. Moore brilliantly depicts her determination and boldness from the very beginning of her political career and gives the fullest account of her wresting the Tory leadership from former prime minister Edward Heath at a moment when no senior figure in the party dared to challenge him. His account of Thatcher's dramatic relationship with Ronald Reagan is riveting. This book also explores in compelling detail the obstacles and indignities that Thatcher encountered as a woman in what was still overwhelmingly a man's world. Moore's admiration for Thatcher is evident, yet his portrait is convincingly clear-eyed, conveying both how remarkable she was and how infuriating she could be, her extraordinary grasp at mastering policy and what needed to be done, and her surprising vulnerabilities. At the moment when Margaret Thatcher becomes a part of history, Moore's portrait enlivens her, compellingly re-creating the circumstances and experiences that shaped one of the most significant world leaders of the postwar era.

Charles Moore was born in 1956 and educated at Eton and Trinity College, Cambridge, where he read history. He joined the staff of The Daily Telegraph in 1979, the year Margaret Thatcher came to power, and as a political columnist in the 1980s, he covered several years of Thatcher's first and second governments. From 1984 to 1990 he was editor of The Spectator; from 1992 to 1995, editor of The Sunday Telegraph; and from 1995 to 2003, editor of The Daily Telegraph, for which he is still a regular columnist. He lives in Sussex.

Praise For Margaret Thatcher: The Authorized Biography: From Grantham to the Falklands…

“A masterpiece of clear and intelligent writing…Margaret Thatcher: From Grantham to the Falklands is already one of the great classic political biographies.” –John O’Sullivan, The Weekly Standard

“It’s an incredible level of access….Margaret Thatcher: From Grantham to the Falklands is the first of two volumes, and it presents a remarkable and richly detailed portrait.” –Craig Fehrman, Boston Globe

“Thatcher was a remarkable politician and Moore does justice to her distinctive qualities.” –David Runciman, London Review of Books

“Moore presents us with enough new material to offer a fresh, even vulnerable person behind the mythology…Moore’s writing is often elegant and vivid, particularly when he escapes the burden of authorized biographer by turning to commentary on Thatcher’s behavior and decisions.” –Jane Merrick, The Independent

“A notable landmark…meticulously researched and gracefully expounded…It is not the only biography to appear so opportunely, but Moore writes with greater freedom, insight, and objectivity…Both ideologically and personally, we now have a better understanding of the remarkable figure who became Britain’s first woman prime minister.” –Peter Clark, Financial Times

“[Moore] is not afraid to address the contradictions and tease out the inconsistencies of his subject. Nor to be critical, sometimes deeply so. The result is to paint a much more multidimensional portrait of Thatcher than the caricature heroine adored by the right or the devil incarnate loathed by the left…The prose is intricate, elegant and laced with dry humor…immensely adds to our knowledge and understanding of the longest-reigning prime minister of the democratic age.” –Andrew Rawnsley, The Observer

“Moore has produced a biography so masterly—so packed with fascinating detail, with such a strong narrative drive, propelled by a central character who is at the same time both very bizarre and very conventional—that it comes as close as biography can come to being a work of art…Friends and foes of Thatcher, and agnostics and sceptics too, will all find plenty on which to feast. On virtually every page there is a revelation that, had it been known at the time, would have blasted all the rest of the news off the front pages…This book is a triumph of diligence. Moore interviewed 315 people, and was clearly blessed with the knack of getting them to open up. Ribald insults, gossip, political secrets, private grievances and funny stories—many of them very, very funny—fly off every page. But it is also a triumph of narrative art and human understanding, at its centre a peculiar force of nature, never to be repeated…one of the greatest political biographies ever written.” –The Daily Mail

“[Moore] has discharged the first part of his commission superbly. He has marshalled a huge range of sources, many of them new, without letting himself be swamped… He has spoken to practically everyone who ever had anything to do with her, and interweaves their recollections skilfully to bring out wider themes… If the second volume, charting her mounting hubris and eventual nemesis, maintains this quality it will be a tremendous achievement.” –John Campbell, The Independent

“The authorized, remarkably evenhanded biography of the grimly divisive, late Iron Lady of Britain…Well balanced. We look forward to the planned sequel.”

“Moore’s pace, his fascination, and his command of detail never slacken. This is a masterly piece of work.” –Matthew Parris, The Times

“This book is a triumph of narrative art and human understanding, at its center a peculiar force of nature, never to be repeated. This is one of the greatest political biographies ever written.” –Craig Brown, Mail on Sunday

“Charles Moore is the perfect biographer: thorough, empathetic, enquiring, and eloquent. This is the portrayal of a life well-lived, explored in a book well-written.” –Sunday Express

“A life’s work of research and interviewing.” –Independent on Sunday

“An immensely readable account of the greatest political life of the second half of the 20th century.” –Patrick O’Flynn, Daily Express

“It’s hard to imagine anyone, even the most anti-Thatcherite, finding this dull…it sparkles with insight, drama, and wit.” –Daily Mail

“There are, of course, plenty of good books about Mrs. Thatcher. But Moore’s is comfortably the best: indeed, with its elegant prose, dry wit, prodigious research and careful judgments, it is one of the best political biographies I have ever read.” –Dominic Sandbrook, Sunday Times

“Now comes the first volume of an authorized biography that may well turn out to be one of the great lives of modern times…It is not often that you can say of a 900-page book that it leaves you wanting to read more. But in this case it is true.” –Spectator

“Good biographies, and this is an exceptionally good one, tell us things we did not know about the life of their subject.” –New Statesman

“This is not just a good book—it's a great one…What gives this work the edge is not just Moore's deep knowledge of and affection for his subject—it is the sheer amount of work he has done. The number of interviews he has conducted is simply staggering. Yet although huge, it quite dances along and because of his very pronounced sense of the absurd, often makes us laugh out loud.” –A.N. Wilson, London Evening Standard