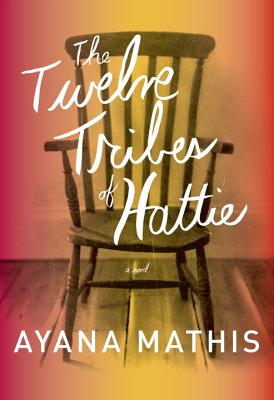 The Twelve Tribes of Hattie

“Hattie came of age in a state and time when a white man could take anything he wanted from a black man, including his life. Like many others, she fled north with her mother and sister, seeking safety and the chance for a better life. Hattie is just 15 when life teaches her these lessons, and 16 when her twin babies die in her arms. Hattie?s story is told in alternating chapters through the children she raised, the trials they gave her, and her perseverance every time life knocked her down. This is the story of a woman's strength and determination and the story of a nation as it wrestles with the oppression of blacks and their striving to achieve equality in a world that judged them solely by the color of their skin.”
— Deon Stonehouse, Sunriver Books, Sunriver, OR
View the List

A debut of extraordinary distinction: Ayana Mathis tells the story of the children of the Great Migration through the trials of one unforgettable family.

In 1923, fifteen-year-old Hattie Shepherd flees Georgia and settles in Philadelphia, hoping for a chance at a better life. Instead, she marries a man who will bring her nothing but disappointment and watches helplessly as her firstborn twins succumb to an illness a few pennies could have prevented.  Hattie gives birth to nine more children whom she raises with grit and mettle and not an ounce of the tenderness they crave.  She vows to prepare them for the calamitous difficulty they are sure to face in their later lives, to meet a world that will not love them, a world that will not be kind. Captured here in twelve luminous narrative threads, their lives tell the story of a mother’s monumental courage and the journey of a nation.

Beautiful and devastating, Ayana Mathis’s The Twelve Tribes of Hattie is wondrous from first to last—glorious, harrowing, unexpectedly uplifting, and blazing with life. An emotionally transfixing page-turner, a searing portrait of striving in the face of insurmountable adversity, an indelible encounter with the resilience of the human spirit and the driving force of the American dream, Mathis’s first novel heralds the arrival of a major new voice in contemporary fiction.

Praise For The Twelve Tribes of Hattie…

"The Twelve Tribes of Hattie is a vibrant and compassionate portrait of a family hardened and scattered by circumstance and yet deeply a family. Its language is elegant in its purity and rigor. The characters are full of life, mingled thing that it is, and dignified by the writer’s judicious tenderness towards them. This first novel is a work of rare maturity. "
—Marilynne Robinson

"The Twelve Tribes of Hattie is beautiful and necessary from the very first sentence. The human lives it renders are on every page lowdown and glorious, fallen and redeemed, and all at the same time. They would be too heartbreaking to follow, in fact, were they not observed in such a generous and artful spirit of hope, in a spirit of mercy, in the spirit of love. Ayana Mathis has written a treasure of a novel."
—Paul Harding

“Writing with stunning authority, clarity, and courage, debut novelist Mathis pivots forward in time, spotlighting intensely dramatic episodes in the lives of Hattie's nine subsequent children (and one grandchild to make the ‘twelve tribes’), galvanizing crises that expose the crushed dreams and anguished legacy of the Great Migration…Mathis writes with blazing insight into the complexities of sexuality, marriage, family relationships, backbone, fraudulence, and racism in a molten novel of lives racked with suffering yet suffused with beauty.”
—Donna Seaman, Booklist (starred)

“Remarkable…Mathis weaves this story with confidence, proving herself a gifted and powerful writer.”
—Publishers Weekly (starred)

“Cutting, emotional…pure heartbreak…though Mathis has inherited some of Toni Morrison’s poetic intonation, her own prose is appealingly earthbound and plainspoken, and the book’s structure is ingenious…an excellent debut.”
—Kirkus Reviews (starred)

Ayana Mathis is a graduate of the Iowa Writers' Workshop and is a recipient of the Michener-Copernicus Fellowship. "The Twelve Tribes of Hattie" is her first novel.