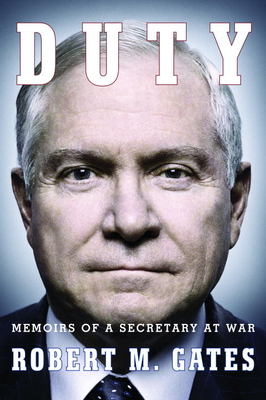 Memoirs of a Secretary at War

From the former secretary of defense, a strikingly candid, vividly written account of his experience serving Presidents George W. Bush and Barack Obama during the wars in Iraq and Afghanistan.

Before Robert M. Gates received a call from the White House in 2006, he thought he’d left Washington politics behind: after working for six presidents in both the CIA and the National Security Council, he was happy in his role as president of Texas A&M University. But when he was asked to help a nation mired in two wars and to aid the troops doing the fighting, he answered what he felt was the call of duty. Now, in this unsparing memoir, meticulously fair in its assessments, he takes us behind the scenes of his nearly five years as a secretary at war: the battles with Congress, the two presidents he served, the military itself, and the vast Pentagon bureaucracy; his efforts to help Bush turn the tide in Iraq; his role as a guiding, and often dissenting, voice for Obama; the ardent devotion to and love for American soldiers—his “heroes”—he developed on the job.

In relating his personal journey as secretary, Gates draws us into the innermost sanctums of government and military power during the height of the Iraq and Afghanistan wars, illuminating iconic figures, vital negotiations, and critical situations in revealing, intimate detail. Offering unvarnished appraisals of Dick Cheney, Joe Biden, Hillary Clinton, and Presidents Bush and Obama among other key players, Gates exposes the full spectrum of behind-closed-doors politicking within both the Bush and Obama administrations.

He discusses the great controversies of his tenure—surges in both Iraq and Afghanistan,  how to deal with Iran and Syria, “Don’t Ask Don’t Tell,” Guantánamo Bay, WikiLeaks—as they played out behind the television cameras. He brings to life the Situation Room during the Bin Laden raid. And, searingly, he shows how congressional debate and action or inaction on everything from equipment budgeting to troop withdrawals was often motivated, to his increasing despair and anger, more by party politics and media impact than by members’ desires to protect our soldiers and ensure their success.

However embroiled he became in the trials of Washington, Gates makes clear that his heart was always in the most important theater of his tenure as secretary: the front lines. We journey with him to both war zones as he meets with active-duty troops and their commanders, awed by their courage, and also witness him greet coffin after flag-draped coffin returned to U.S. soil, heartbreakingly aware that he signed every deployment order. In frank and poignant vignettes, Gates conveys the human cost of war, and his admiration for those brave enough to undertake it when necessary.
Duty tells a powerful and deeply personal story that allows us an unprecedented look at two administrations and the wars that have defined them.


Praise For Duty: Memoirs of a Secretary at War…

“Probably one of the best Washington memoirs ever...Historians and policy wonks will bask in the revelations Gates provides on major decisions from late 2006 to 2011, the span of his time at the Pentagon…Gates is doing far more than just scoring points in this revealing volume. The key to reading it is understanding that he was profoundly affected by his role in sending American soldiers overseas to fight and be killed or maimed.”
—Thomas E. Ricks, The New York Times Book Review

“Touching, heartfelt...fascinating...Gates takes the reader inside the war-room deliberations of Presidents George W. Bush and Barack Obama and delivers unsentimental assessments of each man’s temperament, intellect and management style...No civilian in Washington was closer to the wars in Iraq and Afghanistan than Gates. As Washington and the rest of the country were growing bored with the grinding conflicts, he seemed to feel their burden more acutely.”
—Greg Jaffe, The Washington Post

“Forthright, impassioned…highly revealing about decision making in both the Obama and Bush White Houses…[Gates’] writing is informed not only by a keen sense of historical context, but also by a longtime Washington veteran’s understanding of how the levers of government work or fail to work. Unlike many careful Washington memoirists, Gates speaks his mind on a host of issues…[he] gives us his shrewd take on a range of foreign policy matters, an understanding of his mission to reform the incoherent spending and procurement policies of the Pentagon, and a tactile sense of what it was like to be defense secretary during two wars.”
—Michiko Kakutani, The New York Times

“A refreshingly honest memoir and a moving one.”
—Jack Keane, The Wall Street Journal

“A compelling memoir and a serious history…A fascinating, briskly honest account [of a] journey through the cutthroat corridors of Washington and world politics, with shrewd, sometimes eye-popping observations along the way about the nature of war and the limits of power.…Gates was a truly historic secretary of defense…precisely because he did get so much done…His descriptions of how he accomplished these feats—the mix of cooptation and coercion that he employed—should be read by every future defense secretary, and executives of all stripes, as a guide for how to command and overhaul a large institution.”
—Fred Kaplan, Slate

“A breathtakingly comprehensive and ultimately unsparing examination of the modern ways of making politics, policy, and war…Students of the nation’s two early twenty-first century wars will find the comprehensive account of Pentagon and White House deliberations riveting. General readers will be drawn to [Gates’] meditations on power and on life at the center of great political decisions…His vision is clear and his tale is sad. Gates takes ‘Duty’ as his title, but the account of his service also brings to mind the other two thirds of the West Point motto: ‘honor’ and ‘country.’”
—David M. Shribman, The Boston Globe

“Duty…is an invaluable contribution to our understanding of what makes Washington tick.”
—Edward Luce, Financial Times

“Gates has offered…an informed and…earnest perspective, one that Americans ought to hear, reflect on and debate.”
—Conor Friedersdorf, The Atlantic

“Engaging and candid….Young people who want to understand and live up to the highest ideals of American statesmanship would do well to read this book carefully; Gates has much to teach about the practical idealism that represents the best kind of American leadership.”
—Foreign Affairs

“This is a serious, thoughtful, illuminating, and valuable insider account of the final years of the George W. Bush administration and early years of the Obama presidency….Gates holds little back in this revealing memoir.”
—Choice

“If you read only one book by a Washington insider this year, make it this one. It should be savored by anyone who wishes to know more about the realities of decision-making in today’s federal government.”
—Library Journal

“The full story that emerges from this detailed and often deeply personal account is of a man fed up with the dysfunction of the nation’s capital.”
—The American Conservative

Robert M. Gates served as secretary of defense from 2006 to 2011. He also served as an officer in the United States Air Force and worked for the Central Intelligence Agency before being appointed director of the agency by President George H. W. Bush. He was a member of the National Security Council staff in four administrations and served eight presidents of both political parties. Additionally, Gates has a continuing distinguished record in the private sector and in academia, including currently serving as chancellor of the College of William and Mary. He holds a Ph.D. in Russian and Soviet history from Georgetown University.