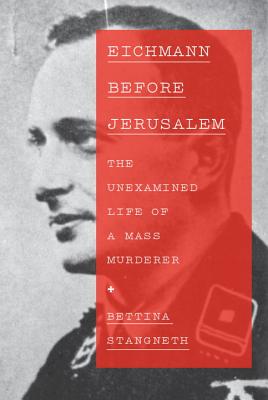 A total and groundbreaking reassessment of the life of Adolf Eichmann a superb work of scholarship that reveals his activities and notoriety among a global network of National Socialists following the collapse of the Third Reich and that permanently challenges Hannah Arendt's notion of the banality of evil.
Smuggled out of Europe after the collapse of Germany, Eichmann managed to live a peaceful and active exile in Argentina for years before his capture by the Mossad. Though once widely known by nicknames such as Manager of the Holocaust, in 1961 he was able to portray himself, from the defendant's box in Jerusalem, as an overworked bureaucrat following orders no more, he said, than just a small cog in Adolf Hitler's extermination machine. How was this carefully crafted obfuscation possible? How did a central architect of the Final Solution manage to disappear? And what had he done with his time while in hiding?
Bettina Stangneth, the first to comprehensively analyze more than 1,300 pages of Eichmann's own recently discovered written notes as well as seventy-three extensive audio reel recordings of a crowded Nazi salon held weekly during the 1950s in a popular district of Buenos Aires draws a chilling portrait, not of a reclusive, taciturn war criminal on the run, but of a highly skilled social manipulator with an inexhaustible ability to reinvent himself, an unrepentant murderer eager for acolytes with whom to discuss past glories while vigorously planning future goals with other like-minded fugitives.
A work that continues to garner immense international attention and acclaim, Eichmann Before Jerusalem maps out the astonishing links between innumerable past Nazis from ace Luftwaffe pilots to SS henchmen both in exile and in Germany, and reconstructs in detail the postwar life of one of the Holocaust's principal organizers as no other book has done.

Bettina Stangneth wrote her dissertation on Immanuel Kant and the concept of radical evil. Ever since then she has been researching a theory of the lie and has written widely on anti-Semitism in eighteenth-century and National Socialist philosophy. In 2000 she was awarded first prize by the Philosophical-Political Academy, Cologne, and she received the German NDR nonfiction book award for Eichmann Before Jerusalem in 2011. Bettina Stangneth is an independent philosopher and lives in Hamburg, Germany. Translated from the German by Ruth Martin"
Loading...
or
Not Currently Available for Direct Purchase