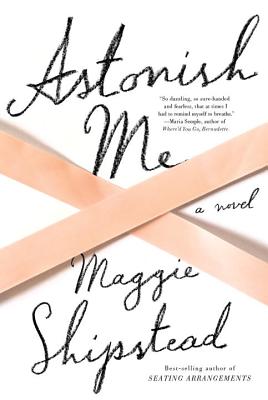 Praise For Astonish Me: A novel…

“This is a novel you must read. . . Shipstead still has her flawless sense of timing and a sensitive ear for the muffled flutterings of hope and desire . . . Intensely compelling. . . Shipstead has captured the mercurial flow of artistic genius, the way it sanctifies some lives even as it condemns others, all of them stretching toward that perfect beauty just out of reach.”
—Ron Charles, Washington Post

“Elegant and forceful . . . Vivid and convincing . . . Bold and thrilling . . . As in ballet, some of the drama is slyly withheld offstage, heightening the suspense, so the narrative unfolds in choreographed bursts of precision and exuberance . . . The way the characters come together in new and surprising pairings is one of the book’s many pleasures, and it sets the stage for a cruel, but inevitable heartbreak.”
—Boston Globe

“Sardonic and insightful . . . Shipstead has admirably absorbed ballet’s vocabulary of steps . . . She does caustic humor, simmering hostilities, and social envy well . . . The novel’s most fascinating relationship is . . . between Elaine and Mr. K—a nearly two-decade push-pull of artistic need, devotion, and dependency, a partnership that, as Elaine matures, transforms from something seemingly reckless into a bond that is deep, tender, and rare.”
—New York Times Book Review

“Gripping . . . Effectively dramatizes the tensions between family and career, perfectionism and compromise . . . Shipstead rises to the challenge of evoking the excitement of dance, and her descriptions are all the more powerful for emphasizing the hard work behind the grace.”
—The New Yorker

“Graceful . . . Electrifying . . . Moves nimbly through time and points of view . . . Shipstead depicts the physical sacrifice of dancers without romanticism or pity . . . Highly artful, and insightful too . . . Spins a new fantasy based on an already fantastical realm . . . Astonish Me shines.”
—San Francisco Chronicle

“Accomplished . . . Immersive . . . Shipstead’s astute, nimble writing barely misses a beat . . . The fragility and shifting dependency of relationships are scrupulously exposed . . . This is a bravura display of high-performance art, the only constant its quest for perfection.”
—The Guardian

“Quietly mesmerizing . . . Sharp and memorable . . . Like the ballet she writes about, Shipstead is an elegant writer, nimble and sophisticated . . . Full of the kind of keen observations about people and relationships that made her first book, Seating Arrangements, one of 2012’s most delightful literary surprises . . . Its truths resonate.”
—San Diego Union-Tribune

“Exhilarating . . . Alternates high drama and emotional excess with the small tensions and compromises of everyday life . . . Shipstead displays a wry wit . . . and she recognizes the subtle tones of emotional relationships . . . She is daring enough to hang her plot on a secret that won’t surprise any reader, as if she’s shaping the novel like a dance, in which plot is either obvious or irreverent. The shock is that it works. Her characters are so compelling that the melodrama they are collectively performing can’t overshadow the details that make them seem alive.”
—Columbus Dispatch

“Nuanced and revealing . . . Marvelously controlled . . . The infused tensions of life in the hothouse of a ballet company are perfectly captured . . . Shipstead is a beautiful writer.”
—New York Daily News

“Thrilling . . . Illuminates the ballet world’s relentless pursuit of perfection . . . equal parts brutality and beauty . . . Shipstead’s characters move in constant, unfolding ensemble with one another. They are staged, in the best sense. Even as their true loves, betrayals, foibles, and triumphs feel inevitable and destined, they also feel bold and true.”
—Chapter 16

“Eloquent . . . Fascinating . . . The novel skips back and forth in time from the mid-1970s to the final act in 2002, all the while building tension and exposing secrets . . . Well-drawn and alluring.”
—The Missourian

“The story is riveting, and the reading experience is enhanced by Shipstead’s beautiful prose style and sensitive, emotional nuances throughout.”
—Hudson Valley News

“Impressive . . . This novel is full of delights: those vivid scenes of New York, the evocation of the exigencies of the ballet, a rich sense of how people get along with each other and become serious friends. Maggie Shipstead is a writer to watch.”
—Washington Times

“As a former ballerina, I can’t put down Maggie Shipstead’s new book, Astonish Me.”
—Caitlin Moran