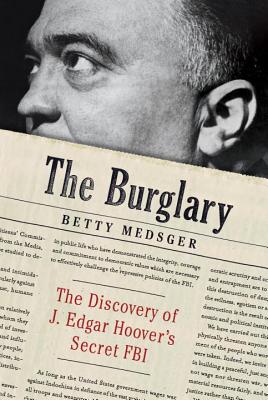 The never-before-told full story of the history-changing break-in at the FBI office in Media, Pennsylvania, by a group of unlikely activists—quiet, ordinary, hardworking Americans—that made clear the shocking truth and confirmed what some had long suspected, that J. Edgar Hoover had created and was operating, in violation of the U.S. Constitution, his own shadow Bureau of Investigation.

It begins in 1971 in an America being split apart by the Vietnam War . . . A small group of activists—eight men and women—the Citizens Commission to Investigate the FBI, inspired by Daniel Berrigan’s rebellious Catholic peace movement, set out to use a more active, but nonviolent, method of civil disobedience to provide hard evidence once and for all that the government was operating outside the laws of the land.

The would-be burglars—nonpro’s—were ordinary people leading lives of purpose: a professor of religion and former freedom rider; a day-care director; a physicist; a cab driver; an antiwar activist, a lock picker; a graduate student haunted by members of her family lost to the Holocaust and the passivity of German civilians under Nazi rule.

Betty Medsger's extraordinary book re-creates in resonant detail how this group of unknowing thieves, in their meticulous planning of the burglary, scouted out the low-security FBI building in a small town just west of Philadelphia, taking into consideration every possible factor, and how they planned the break-in for the night of the long-anticipated boxing match between Joe Frazier (war supporter and friend to President Nixon) and Muhammad Ali (convicted for refusing to serve in the military), knowing that all would be fixated on their televisions and radios.

Medsger writes that the burglars removed all of the FBI files and, with the utmost deliberation, released them to various journalists and members of Congress, soon upending the public’s perception of the inviolate head of the Bureau and paving the way for the first overhaul of the FBI since Hoover became its director in 1924.  And we see how the release of the FBI files to the press set the stage for the sensational release three months later, by Daniel Ellsberg, of the top-secret, seven-thousand-page Pentagon study on U.S. decision-making regarding the Vietnam War, which became known as the Pentagon Papers.

At the heart of the heist—and the book—the contents of the FBI files revealing J. Edgar Hoover’s “secret counterintelligence program” COINTELPRO, set up in 1956 to investigate and disrupt dissident political groups in the United States in order “to enhance the paranoia endemic in these circles,” to make clear to all Americans that an FBI agent was “behind every mailbox,” a plan that would discredit, destabilize, and demoralize groups, many of them legal civil rights organizations and antiwar groups that Hoover found offensive—as well as black power groups, student activists, antidraft protestors, conscientious objectors.

The author, the first reporter to receive the FBI files, began to cover this story during the three years she worked for The Washington Post and continued her investigation long after she'd left the paper, figuring out who the burglars were, and convincing them, after decades of silence, to come forward and tell their extraordinary story.

The Burglary is an important and riveting book, a portrait of the potential power of non­violent resistance and the destructive power of excessive government secrecy and spying.

Praise For The Burglary: The Discovery of J. Edgar Hoover's Secret FBI…

“Impeccably researched, elegantly presented, engaging…For those seeking a particularly egregious example of what can happen when secrecy gets out of hand, The Burglary is a natural place to begin.”
-David Oshinsky, New York Times Book Review

“A cinematic account . . . By turns narrative and expository, The Burglary provides ample historical context, makes telling connections and brings out surprising coincidences . . . makes a powerful argument for moral acts of whistle-blowing in the absence of government action.”
—San Francisco Chronicle

“An important work, the definitive treatment of an unprecedented and largely forgotten ‘act of resistance’ that revealed shocking official criminality in postwar America. One need not endorse break-ins as a form of protest to welcome this deeply researched account of the burglary at Media. Ms. Medsger’s reporting skill and lifelong determination enabled her to do what Hoover’s FBI could not: solve the crime and answer to history.”
—The Wall Street Journal

“Riveting and extremely readable. Not just an in-depth look at a moment in history, The Burglary is also extremely relevant to today's debates over national security, privacy, and the leaking of government secrets to journalists.”
—The Huffington Post

“The break-in at the FBI offices in Media, Pennsylvania changed history.  It began to undermine J. Edgar Hoover’s invulnerability. Betty Medsger writes a gripping story about the burglary, the burglars, and the FBI’s fervid but fruitless efforts to catch them.  Her story of J. Edgar Hoover’s FBI (and today’s NSA) teaches the dangers of secret power.”
-Frederick A. O. Schwarz, Jr., former Chief Counsel to the U.S. Senate’s Church Committee investigating America’s intelligence agencies and author of the forthcoming Unchecked and Unbalanced

"I stayed up until 3 a.m. today. Now it's nearly 6 p.m. I have not done laundry, paid my bills or washed the dishes. I can't put the damn book down. What a triumphant piece of work!"
-Rita Henley Jensen, founder and editor-in-chief, Women's eNews

“A riveting account of a little-known burglary that transformed American politics. Medsger's carefully documented findings underscore how secrecy enabled FBI officials to undermine a political system based on the rule of law and accountability. This is a masterful book, a thriller.”
-Athan Theoharis, author of Abuse of Power: How Cold War Surveillance and Secrecy Policy Shaped the Response to 9/11

"Ordinary people have the courage and community to defeat the most powerful and punitive of institutions -- including the FBI. That's the unbelievable-but-true story told by Better Medsger, the only writer these long term and brave co-conspirators trusted to tell it. The Burglary will keep you on the edge of your seat -- right up until you stand up and cheer!"
-Gloria Steinem

“In The Burglary, Betty Medsger solves the decades-long mystery the FBI never could: who broke into an FBI office in 1971 and exposed the Bureau’s secret program to stifle dissent? An astonishing and improbable tale of anonymous American heroes who risked their own freedom to secure ours, triggering the first attempt to subject our intelligence agencies to democratic controls. The book couldn’t be more timely given the current furor over a new generation of domestic spying.”
-Michael German, former covert counterterrorism FBI agent

“A masterpiece of investigative reporting. As a writer, I admire the way Betty Medgser has explored every angle of this truly extraordinary piece of history and told it with the compelling tension of a detective story. As an American, I’m grateful to know at last the identities of this improbable crew of brilliant whistle-blowers who are true national heroes. As someone appalled by recent revelations of out-of-control NSA spying, I’m reminded that it has all happened before, and that then, as now, it took rare courage to expose it. This brave group of friends were the Edward Snowdens of their time.”
-Adam Hochschild, author of King Leopold’s Ghost

“There is joy and fun—and lots of law breaking—in Betty Medsger's book. The Burglary answers the question long asked and speculated about within Catholic Left, as well as law and order, circles: Who did the 1971 Media, Pa., FBI break-in . . . Fast paced, fascinating . . . studded with timely insights for today's WikiLeaks, intelligence breaches and NSA scandals.”
—Frida Berrigan, Waging Nonviolence

Betty Medsger was born in Johnstown, Pennsylvania. Medsger is a former chair of the Department of Journalism at San Francisco State University and is the founder of its Center for Integration and Improvement of Journalism. She is the author of Winds of Change, Framed, and Women at Work. She lives in New York and Connecticut.