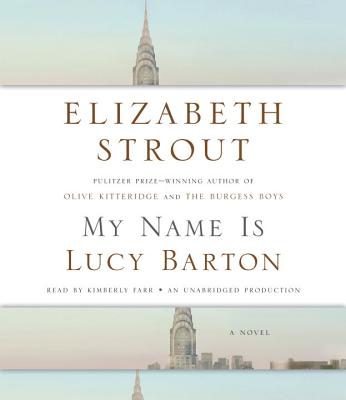 My Name Is Lucy Barton

“Strout has the incredible ability to take ordinary, even mundane situations and use them to make acute observations on the human condition. A mother's visit to her daughter in the hospital becomes the vehicle for an astute examination of daily needs, desires, yearnings, wishes, and dreams that become so much of the remembered experience. Using spare, precise, but beautiful language, she has produced another masterpiece in a growing list of impressive work.”
— Bill Cusumano (M), Square Books, Oxford, MS
View the List

#1 NEW YORK TIMES BESTSELLER - LONGLISTED FOR THE MAN BOOKER PRIZE - A simple hospital visit becomes a portal to the tender relationship between mother and daughter in this extraordinary novel by the Pulitzer Prize-winning author of Olive Kitteridge and The Burgess Boys. NAMED ONE OF THE BEST BOOKS OF THE YEAR BY
The Washington Post - The New York Times Book Review - NPR - BookPage - LibraryReads - Minneapolis Star Tribune - St. Louis Post-Dispatch
Look for Elizabeth Strout's highly anticipated new work of fiction, Anything Is Possible, which is available for pre-order now. Lucy Barton is recovering slowly from what should have been a simple operation. Her mother, to whom she hasn't spoken for many years, comes to see her. Gentle gossip about people from Lucy's childhood in Amgash, Illinois, seems to reconnect them, but just below the surface lie the tension and longing that have informed every aspect of Lucy's life: her escape from her troubled family, her desire to become a writer, her marriage, her love for her two daughters. Knitting this powerful narrative together is the brilliant storytelling voice of Lucy herself: keenly observant, deeply human, and truly unforgettable. Praise for My Name Is Lucy Barton "There is not a scintilla of sentimentality in this exquisite novel. Instead, in its careful words and vibrating silences, My Name Is Lucy Barton offers us a rare wealth of emotion, from darkest suffering to--'I was so happy. Oh, I was happy'--simple joy."--Claire Messud, The New York Times Book Review "Spectacular . . . Smart and cagey in every way. It is both a book of withholdings and a book of great openness and wisdom. . . . Strout] is in supreme and magnificent command of this novel at all times."--Lily King, The Washington Post

"A short novel about love, particularly the complicated love between mothers and daughters, but also simpler, more sudden bonds . . . It evokes these connections in a style so spare, so pure and so profound the book almost seems to be a kind of scripture or sutra, if a very down-to-earth and unpretentious one."--Marion Winik, Newsday

"Potent with distilled emotion. Without a hint of self-pity, Strout captures the ache of loneliness we all feel sometimes."--Time "An aching, illuminating look at mother-daughter devotion."--People "A quiet, sublimely merciful contemporary novel about love, yearning, and resilience in a family damaged beyond words."--The Boston Globe "Sensitive, deceptively simple . . . It is Lucy's gentle honesty, complex relationship with her husband, and nuanced response to her mother's shortcomings that make this novel so subtly powerful. . . . It's] more complex than it first appears, and all the more emotionally persuasive for it."--San Francisco Chronicle "Strout maps the complex terrain of human relationships by focusing on that which is often unspoken and only implied. . . . A powerful addition to Strout's body of work."--The Seattle Times " Strout] reminds us of the power of our stories--and our ability to transcend our troubled narratives."--Miami Herald "Magnificent."--Ann Patchett

Elizabeth Strout is the Pulitzer Prize-winning author of Olive Kitteridge, as well as The Burgess Boys, a New York Times bestseller; Abide with Me, a national bestseller and Book Sense pick; and Amy and Isabelle, which won the Los Angeles Times Art Seidenbaum Award for First Fiction and the Chicago Tribune Heartland Prize. She has also been a finalist for the PEN/Faulkner Award and the Orange Prize in England. Her short stories have been published in a number of magazines, including The New Yorker and O: The Oprah Magazine. Elizabeth Strout lives in New York City.
Loading...
or
Not Currently Available for Direct Purchase