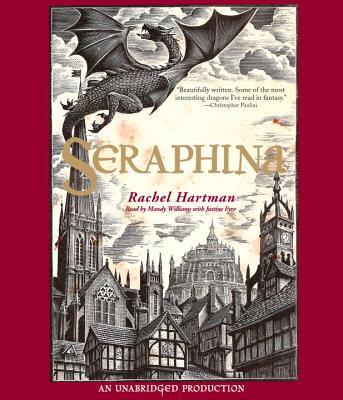 In the kingdom of Goredd, dragons and humans live and work side by side – while below the surface, tensions and hostility simmer.

The newest member of the royal court, a uniquely gifted musician named Seraphina, holds a deep secret of her own. One that she guards with all of her being.

When a member of the royal family is brutally murdered, Seraphina is drawn into the investigation alongside the dangerously perceptive—and dashing—Prince Lucien. But as the two uncover a sinister plot to destroy the wavering peace of the kingdom, Seraphina’s struggle to protect her secret becomes increasingly difficult… while its discovery could mean her very life.

"Will appeal to both fans of Christopher Paolini’s Eragon series and Robin McKinley’s The Hero and the Crown." —Entertainment Weekly

As a child, RACHEL HARTMAN played cello and lip-synched Mozart operas with her sisters. The famous Renaissance song "Mille Regretz" first moved Rachel to write a fantasy novel rooted in music, but her inspiration didn't end there. She wrote Seraphina while listening to medieval Italian polyphony, Breton bagpipe-rock, prog metal, Latin American baroque, and Irish sean nós. Rachel Hartman lives with her family in Vancouver BC.
Loading...
or
Not Currently Available for Direct Purchase