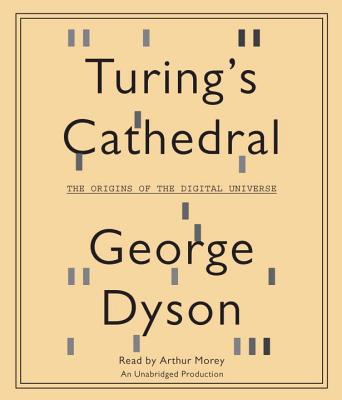 The Origins of the Digital Universe

“It is possible to invent a single machine which can be used to compute any computable sequence,” twenty-four-year-old Alan Turing announced in 1936. In Turing’s Cathedral, George Dyson focuses on a small group of men and women, led by John von Neumann at the Institute for Advanced Study in Princeton, New Jersey, who built one of the first computers to realize Alan Turing’s vision of a Universal Machine. Their work would break the distinction between numbers that mean things and numbers that do things—and our universe would never be the same.

Using five kilobytes of memory (the amount allocated to displaying the cursor on a computer desktop of today), they achieved unprecedented success in both weather prediction and nuclear weapons design, while tackling, in their spare time, problems ranging from the evolution of viruses to the evolution of stars.

Dyson’s account, both historic and prophetic, sheds important new light on how the digital universe exploded in the aftermath of World War II. The proliferation of both codes and machines was paralleled by two historic developments: the decoding of self-replicating sequences in biology and the invention of the hydrogen bomb. It’s no coincidence that the most destructive and the most constructive of human inventions appeared at exactly the same time.

How did code take over the world? In retracing how Alan Turing’s one-dimensional model became John von Neumann’s two-dimensional implementation, Turing’s Cathedral offers a series of provocative suggestions as to where the digital universe, now fully three-dimensional, may be heading next.

George Dyson is a historian of technology whose interests include the development (and redevelopment) of the Aleut kayak ("Baidarka), " the evolution of digital computing and telecommunications" (Darwin Among the Machines), " and the exploration of space "(Project Orion)."

Praise For Turing's Cathedral: The Origins of the Digital Universe…

“An expansive narrative . . . The book brims with unexpected detail. Maybe the bomb (or the specter of the machines) affected everyone. Gödel believed his food was poisoned and starved himself to death. Turing, persecuted for his homosexuality, actually did die of poisoning, perhaps by biting a cyanide-laced apple. Less well known is the tragic end of Klári von Neumann, a depressive Jewish socialite who became one of the world’s first machine-language programmers and enacted the grandest suicide of the lot, downing cocktails before walking into the Pacific surf in a black dress with fur cuffs. Dyson’s well made sentences are worthy of these operatic contradictions . . . A groundbreaking history of the Princeton computer.”
—William Poundstone, The New York Times Book Review

“Dyson combines his prodigious skills as a historian and writer with his privileged position within the [Institute for Advanced Study’s] history to present a vivid account of the digital computer project . . .  A powerful story of the ethical dimension of scientific research, a story whose lessons apply as much today in an era of expanded military R&D as they did in the ENIAC and MANIAC era . . . Dyson closes the book with three absolutely, hair-on-neck-standing-up inspiring chapters on the present and future, a bracing reminder of the distance we have come on some of the paths envisioned by von Neumann, Turing, et al.”
—Cory Doctorow, Boing Boing

“A fascinating combination of the technical and human stories behind the computing breakthroughs of the 1940s and ’50s . . . It demonstrates that the power of human thought often precedes determination and creativity in the birth of world-changing technology . . . An important work.”
—Richard DiDio, Philadelphia Inquirer

“Dyson’s book is not only learned, but brilliantly and surprisingly idiosyncratic and strange.”
—Josh Rothman, Braniac blog, Boston Globe

“Beyond the importance of this book as a contribution to the history of science, as a generalist I was struck by Dyson’s eye and ear for the delightfully entertaining detail . . . Turing’s Cathedral is suffused . . . with moments of insight, quirk and hilarity rendering it more than just a great book about science. It’s a great book, period.”
—Douglas Bell, The Globe and Mail

“The greatest strength of Turing’s Cathedral lies in its luscious wealth of anecdotal details about von Neumann and his band of scientific geniuses at IAS.  Dyson himself is the son of Freeman Dyson, one of America’s greatest twentieth-century physicists and an IAS member from 1948 onward, and so Turing’s Cathedral is, in part, Dyson’s attempt to make both moral and intellectual sense of his father’s glittering and yet severely compromised scientific generation.”
—Andrew Keen, B&N Review

“A mesmerizing tale brilliantly told . . . . The use of wonderful quotes and pithy sketches of the brilliant cast of characters further enriches the text . . . . Meticulously researched and packed with not just technological details, but sociopolitical and cultural details as well—the definitive history of the computer.”
—Kirkus (starred review)

“The most powerful technology of the last century was not the atomic bomb, but software—and both were invented by the same folks. Even as they were inventing it, the original geniuses imagined almost everything software has become since. At long last, George Dyson delivers the untold story of software’s creation. It is an amazing tale brilliantly deciphered.”
—Kevin Kelly, cofounder of WIRED magazine, author of What Technology Wants

“It is a joy to read George Dyson’s revelation of the very human story of the invention of the electronic computer, which he tells with wit, authority, and insight. Read Turing’s Cathedral as both the origin story of our digital universe and as a perceptive glimpse into its future.”
—W. Daniel Hillis, inventor of The Connection Machine, author of The Pattern on the Stone