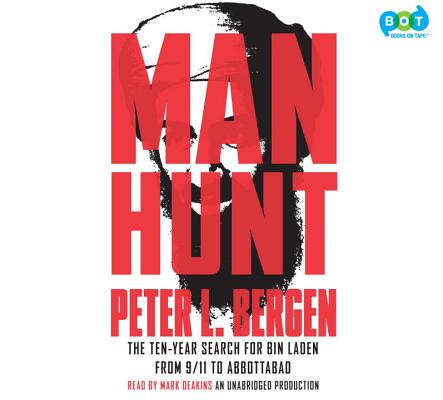 The gripping account of the decade-long hunt for the world's most wanted man.
It was only a week before 9/11 that Peter Bergen turned in the manuscript of "Holy War, Inc.", the story of Osama bin Laden--whom Bergen had once interviewed in a mud hut in Afghanistan--and his declaration of war on America. The book became a "New York Times "bestseller and the essential portrait of the most formidable terrorist enterprise of our time. Now, in "Manhunt, " Bergen picks up the thread with this taut yet panoramic account of the pursuit and killing of bin Laden.
Here are riveting new details of bin Laden's flight after the crushing defeat of the Taliban to Tora Bora, where American forces came startlingly close to capturing him, and of the fugitive leader's attempts to find a secure hiding place. As the only journalist to gain access to bin Laden's Abbottabad compound before the Pakistani government demolished it, Bergen paints a vivid picture of bin Laden's grim, Spartan life in hiding and his struggle to maintain control of al-Qaeda even as American drones systematically picked off his key lieutenants.
Half a world away, CIA analysts haunted by the intelligence failures that led to 9/11 and the WMD fiasco pored over the tiniest of clues before homing in on the man they called "the Kuwaiti"--who led them to a peculiar building with twelve-foot-high walls and security cameras less than a mile from a Pakistani military academy. This was the courier who would unwittingly steer them to bin Laden, now a prisoner of his own making but still plotting to devastate the United States.
Bergen takes us inside the Situation Room, where President Obama considers the COAs (courses of action) presented by his war council and receives conflicting advice from his top advisors before deciding to risk the raid that would change history--and then inside the Joint Special Operations Command, whose "secret warriors," the SEALs, would execute Operation Neptune Spear. From the moment two Black Hawks take off from Afghanistan until bin Laden utters his last words, "Manhunt" reads like a thriller.
Based on exhaustive research and unprecedented access to White House officials, CIA analysts, Pakistani intelligence, and the military, this is the definitive account of ten years in pursuit of bin Laden and of the twilight of al-Qaeda.

PETER BERGEN is a National Security Analyst for CNN and the author of three previous books about Al Qaeda and the war on terrorism, including Holy War Inc., a "New York Times "bestseller that has been translated into eighteen languages. Bergen is the director of the national security studies program at the New America Foundation, a research fellow at NYU's Center on Law and Security, and has taught at Harvard University's Kennedy School of Government, and at Johns Hopkins University.
Loading...
or
Not Currently Available for Direct Purchase