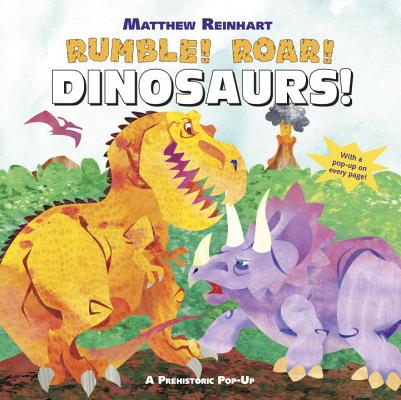 Following the publication of Rescue: Pop-Up Emergency Vehicles and Puppies, Kittens & Other Pop-Up Pets, Matthew Reinhart turns his pop-up wizardry on two new subjects: dinosaurs and princesses. This young and very affordable pop-up series is perfect for these economic times.

Rumble! Roar! Dinosaurs! features bright cut-paper collage artwork, just right for the young set. Pop-ups of a Stegosaurus, an Apatosaurus and her baby, a Deinonychus, a Pteranodon, a Triceratops, and the grand finale of a T-Rex and an Ankylosaur in a fight to the finish are brought to life with pop-ups, pull-tabs, lift-the flaps, and more. The inside front and back covers will feature a bookplate, a pronunciation guide with art, and a coloring activity for added value.

MATTHEW REINHART is a master paper-engineer as well as an author and illustrator of children's books. His works include "Puppies, Kittens, and Other Pop-up Pets; Rescue: Pop-Up Emergency Vehicles; Cinderella: A Pop-Up Fairy Tale; Star Wars: A Pop-Up Guide to the Galaxy; The Encyclopedia Prehistorica" and "Encyclopedia Mythologica" series on which he collaborated with Robert Sabuda, and many more. He lives and works in New York City.

Publishers Weekly, August 27, 2012:
"This paperback pop-up is a serious bargain (coloring book pages that open and close the book only add value). Inside, kids will find pared-down versions of Reinhart's trademark pop-ups that still show a good deal of personality and ingenuity."