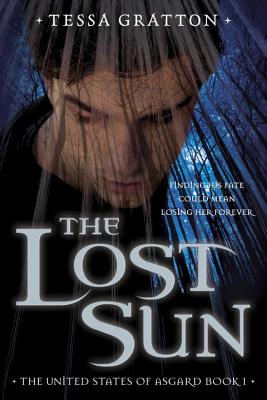 Fans of Neil Gaiman's "American Gods" and Holly Black's "The Curse Workers" will embrace this richly drawn, Norse-mythology-infused alternate world: the United States of Asgard. Seventeen-year-old Soren Bearskin is trying to escape the past. His father, a famed warrior, lost himself to the battle-frenzy and killed thirteen innocent people. Soren cannot deny that berserking is in his blood--the fevers, insomnia, and occasional feelings of uncontrollable rage haunt him. So he tries to remain calm and detached from everyone at Sanctus Sigurd's Academy. But that's hard to do when a popular, beautiful girl like Astrid Glyn tells Soren she dreams of him. That's not all Astrid dreams of--the daughter of a renowned prophetess, Astrid is coming into her own inherited abilities.
When Baldur, son of Odin and one of the most popular gods in the country, goes missing, Astrid sees where he is and convinces Soren to join her on a road trip that will take them to find not only a lost god, but also who they are beyond the legacy of their parents and everything they've been told they have to be.

Praise For The Lost Sun…

"Strong writing and an inventive recasting of mythological characters combine to create an evocative, romantic adventure. The novel wisely allows its characters to revel in their mythological underpinnings rather than trying to make them seem like authentic contemporary teens, yet Soren and Astrid’s struggle to understand their place in the larger world will still resonate with readers, while their intense, moving romance will elicit plenty of sighs. Reading like a slightly older sibling to Armstrong and Marr’s Loki’s Wolves, this rousing narrative offers all the best elements of a mythological quest while giving unfamiliar readers a thorough but not heavy-handed introduction to the traditional tales." --The Bulletin of the Center for Children's Books

"Gratton sets up an alternate universe where Norse gods are juxtaposed with typical American life in this first novel in a new series. While Astrid dreams of apples and Soren battles the berserker rage inside, they forge new alliances and a bond of friendship that puts them squarely in the path of a cat-and-mouse game played by gods." --Booklist

TESSA GRATTON has wanted to be a paleontologist or a wizard since she was seven. She was too impatient to hunt dinosaurs, but is still searching for someone to teach her magic. After traveling the world with her military family, she acquired a BA (and the important parts of an MA) in gender studies, and then settled down in Kansas with her partner, her cats, and her mutant dog. You can visit her at TessaGratton.com.
Loading...
or
Not Currently Available for Direct Purchase