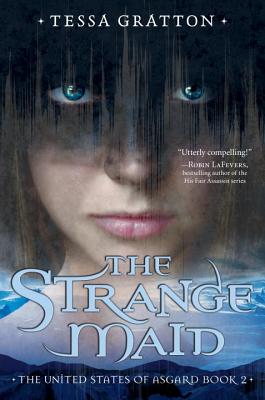 Fans of Neil Gaiman, Holly Black, and Maggie Stiefvater will embrace the richly drawn, Norse-influenced alternate world of the United States of Asgard, where cell phones, rock bands, and evangelical preachers coexist with dragon slaying, rune casting, and sword training in schools. Where the president runs the country alongside a council of Valkyries, gods walk the red carpet with Hollywood starlets, and the U.S. military has a special battalion dedicated to eradicating Rocky Mountain trolls.
Signy Valborn was seven years old when she climbed the New World Tree and met Odin Alfather, who declared that if she could solve a single riddle, he would make her one of his Valkyrie. For ten years Signy has trained in the arts of war, politics, and leadership, never dreaming that a Greater Mountain Troll might hold the answer to the riddle, but that's exactly what Ned the Spiritless promises her. A mysterious troll hunter who talks in riddles and ancient poetry, Ned is a hard man to trust. Unfortunately, Signy is running out of time. Accompanied by an outcast berserker named Soren Bearstar, she and Ned take off across the ice sheets of Canadia to hunt the mother of trolls and claim Signy's destiny.

TESSA GRATTON has wanted to be a paleontologist or a wizard since she was seven. She was too impatient to hunt dinosaurs, but is still searching for someone to teach her magic. After traveling the world with her military family, she acquired a BA (and the important parts of an MA) in gender studies, and then settled down in Kansas with her partner, her cats, and her mutant dog.
Loading...
or
Not Currently Available for Direct Purchase