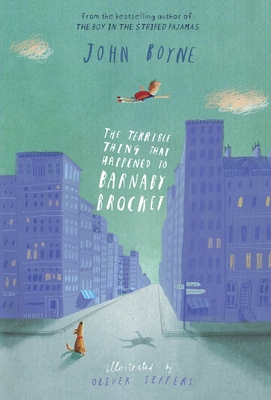 The Terrible Thing that Happened to Barnaby Brocket

Barnaby Brocket is an ordinary 8-year-old boy in most ways, but he was born different in one important way: he floats. Unlike everyone else, Barnaby does not obey the law of gravity. His parents, who have a horror of being noticed, want desperately for Barnaby to be normal, but he can't help who he is. And when the unthinkable happens, Barnaby finds himself on a journey that takes him all over the world. From Brazil to New York, Canada to Ireland, and even to space, the floating boy meets all sorts of different people—and discovers who he really is along the way.

This whimsical novel will delight middle graders, and make readers of all ages question the meaning of normal.

Praise For The Terrible Thing that Happened to Barnaby Brocket…

Starred Review, Publishers Weekly, December 3, 2012:
“It’s a fun and thought-provoking story of self-discovery, and the humor and gentleness with which Boyne delivers his message make it both unforgettable and delightful.”

JOHN BOYNE was born in Ireland in 1971 and is the author of six novels for adults. His first novel for children, The Boy in the Striped Pajamas, won two Irish Book Awards, was shortlisted for the British Book Award, and has been made into a film. His novels are published in over 30 languages. He lives in Dublin.

OLIVER JEFFERS is an internationally acclaimed author-illustrator. His first picture book, How to Catch a Star (HarperCollins) was published in 2004 and since then he has created a further five picture books to much critical acclaim. He has won the Irish Book Award (where he first met John Boyne), the Blue Peter Book of the Year and the Nestlé Children's Book Prize as well as a host of shortlistings including the prestigious Kate Greenaway Medal. His books have been translated into 19 languages.
Loading...
or support indie stores by buying on