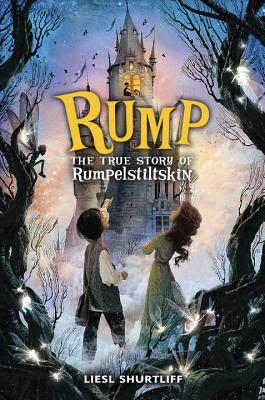 The True Story of Rumpelstiltskin

“In a land where names mean everything, 'Rump' isn't what you want to be called. But this incomplete name is all that was heard before Rump's mother died, leaving him to search for his own destiny ' and that, of course, involves spinning straw into gold and bargaining for a girl's first-born child. This retelling of Rumpelstiltskin stands out for its imagination and characterization, and readers will be rooting for Rump like they never did for the man in the fairy tale.”
— Melissa Oates, Fiction Addiction, Greenville, SC
View the List

In a magic kingdom where your name is your destiny, 12-year-old Rump is the butt of everyone's joke. But when he finds an old spinning wheel, his luck seems to change. Rump discovers he has a gift for spinning straw into gold. His best friend, Red Riding Hood, warns him that magic is dangerous, and she’s right. With each thread he spins, he weaves himself deeper into a curse.

To break the spell, Rump must go on a perilous quest, fighting off pixies, trolls, poison apples, and a wickedly foolish queen. The odds are against him, but with courage and friendship—and a cheeky sense of humor—he just might triumph in the end.

A Texas Bluebonnet finalist and winner of the ILA award for middle grade fiction, Rump is perfect for fans of Gail Carson Levine's Ella Enchanted or Adam Gidwitz's A Tale Dark and Grimm. And don't miss Liesl Shurtliff's other fairy tale retellings: Jack: The True Story of Jack and the Beanstalk and Red: The True Story of Red Riding Hood.

"A fresh riff on the Grimm Brothers' Rumpelstiltskin, told with wit from the impish point of view of the troublemaker himself." —People

Praise For Rump: The True Story of Rumpelstiltskin…

People Magazine, August 12, 2013:
"A fresh riff on the Grimm Brothers' Rumpelstiltskin, told with wit from the impish point of view of the troublemaker himself."

School Library Journal, May, 2013:
“A beguiling take on a classic tale.... This captivating fantasy has action, emotional depth, and lots of humor.”

BookPage, April 9, 2013:
“Shurtliff takes the traditional fairy tale and turns it on its head, interspersing humor with tenderness, action with insight. Rump shows the other side of Rumpelstiltskin, one of the most vilified characters in fairy tales, and reminds readers that in a good story, very little is as it seems.”

"Liesl Shurtliff does more than spin words into gold—she gets us rooting for Rumpelstiltskin, a most magical feat."
—Kirby Larson, Newbery Honor-winning author of Hattie Big Sky

Liesl Shurtliff was born and raised in Salt Lake City, Utah, with the mountains for her playground. Just like Rump, Liesl was shy about her name, growing up. Not only did it rhyme with weasel, she could never find it on any of those personalized key chains in gift shops. But over the years she’s grown to love having an unusual name—and today she wouldn’t change it for the world!
Before she became a writer, Liesl graduated from Brigham Young University with a degree in music, dance, and theater. Her first three books, Rump, Jack and Red are all New York Times bestsellers and Rump was named to over two dozen state award lists and won an ILA Children’s Book Award. She lives in Chicago with her family, where she continues to spin fairy tales.

Visit her at lieslshurtliff.com
Loading...
or support indie stores by buying on