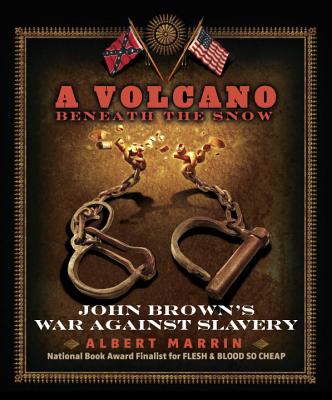 A Volcano Beneath the Snow

John Brown is a man of many legacies, from hero, freedom fighter, and martyr, to liar, fanatic, and "the father of American terrorism." Some have said that it was his seizure of the arsenal at Harper's Ferry that rendered the Civil War inevitable.

Deeply religious, Brown believed that God had chosen him to right the wrong of slavery. He was willing to kill and die for something modern Americans unanimously agree was a just cause. And yet he was a religious fanatic and a staunch believer in "righteous violence," an unapologetic committer of domestic terrorism. Marrin brings 19th-century issues into the modern arena with ease and grace in a book that is sure to spark discussion.

ALBERT MARRIN is the author of numerous highly regarded nonfiction books for young readers, including Flesh and Blood So Cheap: The Triangle Fire and Its Legacy, Years of Dust, and Black Gold: The Story of Oil in Our Lives. His many honors include the Washington Children's Book Guild and Washington Post Non-Fiction Award for an "outstanding lifetime contribution that has enriched the field of children's literature," and the James Madison Book Award for lifetime achievement.
Loading...
or
Not Currently Available for Direct Purchase