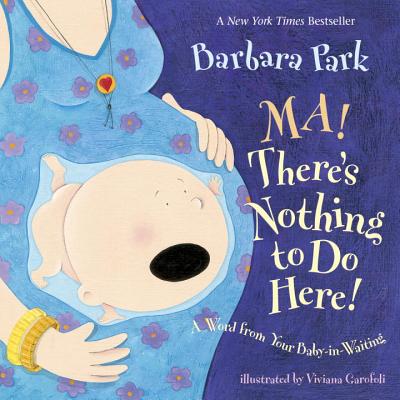 Ma! There's Nothing to Do Here! (Board Books)

A Word from Your Baby-In-Waiting

A precocious baby is beyond bored in his mother's womb. He's ready to play on the swingset, meet other boys and girls, and to canoe But until then what will he do to pass the time?

BARBARA PARK is best known as the author of the wildly popular "New York Times" bestselling Junie B. Jones series, which has kept kids (and their grown-ups) laughing and reading for over two decades. Beloved by millions, the Junie B. Jones books have been translated into multiple languages and are a time-honored staple in elementary school classrooms around the world. Barbara once said, I ve never been sure whether Junie B. s fans love her in spite of her imperfections or because of them. But either way, she s gone out into the world and made more friends than I ever dreamed possible.

Barbara Park is also the author of award-winning middle grade novels and bestselling picture books, including "Skinnybones, Mick Harte Was Here, " and "Ma! There s Nothing to Do Here!

Barbara Park was born in New Jersey in 1947 and spent most of her adult life in Arizona, where she and her husband, Richard, raised two sons. Barbara died in 2013, but her legacy lives on in the laughter her books give to readers all over the world. VIVIANA GAROFOLI was born in Buenos Aires, Argentina, where she currently lives with her husband, Sergio, and two daughters."
or
Not Currently Available for Direct Purchase
Copyright © 2020 American Booksellers Association