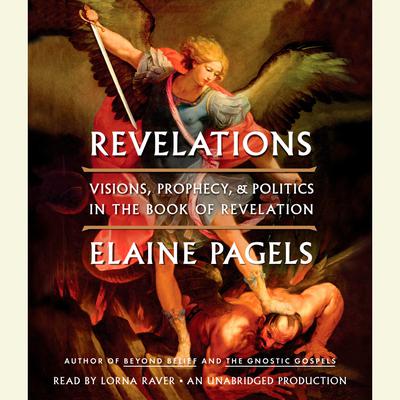 Visions, Prophecy, and Politics in the Book of Revelation

Elaine Pagels explores the surprising history of the most controversial book of the Bible.
In the waning days of the Roman Empire, militant Jews in Jerusalem had waged an
all-out war against Rome’s occupation of Judea, and their defeat resulted in the desecration
of the Great Temple in Jerusalem. In the aftermath of that war, John of Patmos, a Jewish
prophet and follower of Jesus, wrote the Book of Revelation, prophesying God’s judgment
on the pagan empire that devastated and dominated his people. Soon after, Christians fearing
arrest and execution championed John’s prophecies as offering hope for deliverance from
evil. Others seized on the Book of Revelation as a weapon against heretics and infidels
of all kinds.
Even after John’s prophecies seemed disproven—instead of being destroyed, Rome
became a Christian empire—those who loved John’s visions refused to discard them and
instead reinterpreted them—as Christians have done for two thousand years. Brilliantly
weaving scholarship with a deep understanding of the human needs to which religion speaks,
Pagels has written what may be the masterwork in her unique career.

Elaine Pagels is the Harrington Spear Paine Professor of Religion at
Princeton University. Her many books include The Gnostic Gospels, winner of
the National Book Award and the National Book Critics Circle Award, the
New York Times bestseller Beyond Belief, and, with Karen King, Reading Judas.