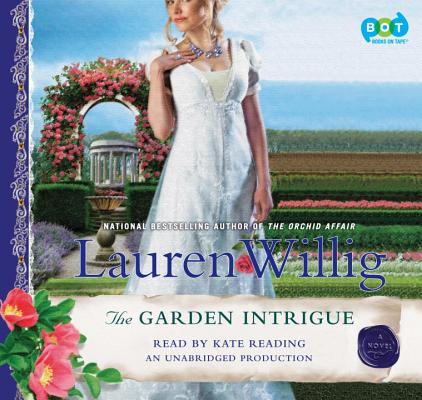 In the ninth installment of Lauren Willig's bestselling Pink Carnation series, an atrocious poet teams up with an American widow to prevent Napoleon's invasion of England.
Secret agent Augustus Whittlesby has spent a decade undercover in France, posing as an insufferably bad poet. The French surveillance officers can't bear to read his work closely enough to recognize the information drowned in a sea of verbiage.
New York-born Emma Morris Delagardie is a thorn in Augustus's side. An old school friend of Napoleon's stepdaughter, she came to France with her uncle, the American envoy; eloped with a Frenchman; and has been rattling around the salons of Paris ever since. Widowed for four years, she entertains herself by drinking too much champagne, holding a weekly salon, and loudly critiquing Augustus's poetry.
As Napoleon pursues his plans for the invasion of England, Whittlesby hears of a top-secret device to be demonstrated at a house party at Malmaison. The catch? The only way in is with Emma, who has been asked to write a masque for the weekend's entertainment.
Emma is at a crossroads: Should she return to the States or remain in France? She'll do anything to postpone the decision-even if it means teaming up with that silly poet Whittlesby to write a masque for Bonaparte's house party. But each soon learns that surface appearances are misleading. In this complicated masque within a masque, nothing goes quite as scripted--especially Augustus's feelings for Emma.

Lauren Willig is the bestselling author of eight previous Pink Carnation novels. She received a graduate degree in English history from Harvard University and a J.D. from Harvard Law School, though she now writes full-time. Willig lives in New York City.
or
Not Currently Available for Direct Purchase
Copyright © 2020 American Booksellers Association