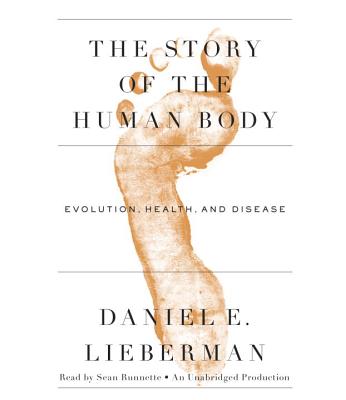 In this landmark book of popular science, Daniel E. Lieberman chair of the department of human evolutionary biology at Harvard University and a leader in the field gives us a lucid and engaging account of how the human body evolved over millions of years, even as it shows how the increasing disparity between the jumble of adaptations in our Stone Age bodies and advancements in the modern world is occasioning this paradox: greater longevity but increased chronic disease.
""
"The Story of the Human Body" brilliantly illuminates as never before the major transformations that contributed key adaptations to the body: the rise of bipedalism; the shift to a non-fruit-based diet; the advent of hunting and gathering, leading to our superlative endurance athleticism; the development of a very large brain; and the incipience of cultural proficiencies. Lieberman also elucidates how cultural evolution differs from biological evolution, and how our bodies were further transformed during the Agricultural and Industrial Revolutions.
While these ongoing changes have brought about many benefits, they have also created conditions to which our bodies are not entirely adapted, Lieberman argues, resulting in the growing incidence of obesity and new but avoidable diseases, such as type 2 diabetes. Lieberman proposes that many of these chronic illnesses persist and in some cases are intensifying because of dysevolution, a pernicious dynamic whereby only the symptoms rather than the causes of these maladies are treated. And finally provocatively he advocates the use of evolutionary information to help nudge, push, and sometimes even compel us to create a more salubrious environment.
(With charts and line drawings throughout.)

Daniel Lieberman is the Chair of the Department of Human Evolutionary Biology at Harvard and a leader in the field. He has wpublished nearly 100 articles, many appearing in the journals "Nature "and "Science." His research and discoveries have been highlighted in newspapers and magazines including "The New York Times, The Boston Globe, Discover, "and "National Geographic." He has frequently appeared on Nova, the BBC, and "Charlie Rose," among other programs."
Loading...
or
Not Currently Available for Direct Purchase