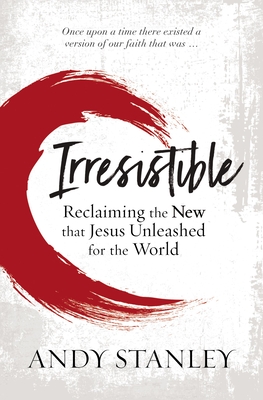 Reclaiming the New That Jesus Unleashed for the World

A fresh look at the earliest Christian movement reveals what made the new faith so compelling...and what we need to change today to make it so again.

Once upon a time there was a version of the Christian faith that was practically irresistible. After all, what could be more so than the gospel that Jesus ushered in? Why, then, isn't it the same with Christianity today?

Author and pastor Andy Stanley is deeply concerned with the present-day church and its future. He believes that many of the solutions to our issues can be found by investigating our roots. In Irresistible, Andy chronicles what made the early Jesus Movement so compelling, resilient, and irresistible by answering these questions:

Many people who leave or disparage the faith cite reasons that have less to do with Jesus than with the conduct of his followers. It's time to hit pause and consider the faith modeled by our first-century brothers and sisters who had no official Bible, no status, and little chance of survival. It's time to embrace the version of faith that initiated--against all human odds--a chain of events resulting in the most significant and extensive cultural transformation the world has ever seen.

This is a version of Christianity we must remember and re-embrace if we want to be salt and light in an increasingly savorless and dark world.