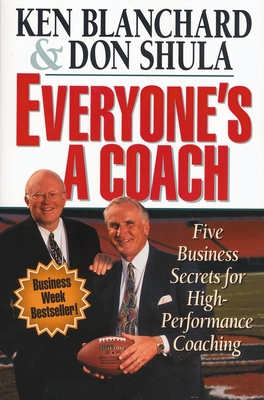 Are the people who report to you giving you their best? Is your team--whether a group of employees, a classroom of students, or your family--performing at its fullest potential?

NFL coaching legend Don Shula and renowned business consultant Ken Blanchard team up in Everyone's a Coach to share their secrets for inspiring others to greatness. At the heart of their book is a simple acronym that describes the qualities of an effective leader:

Using an effective tag-team approach, Shula and Blanchard personally unpack the five leadership secrets behind this acronym. First, Shula tells you how each coaching concept worked on the field. Then, Blanchard explains how to apply that concept to your leadership situation. Complete with a self-test for measuring your personal coaching effectiveness, Everyone's a Coach will help you unleash the excellence in anyone.

Ken Blanchard is the coauthor of The One Minute Manager(R) and fifty other books, including the New York Times business bestsellers Gung Ho! and Raving Fans. His books have combined sales of more than eighteen million copies in more than twenty-seven languages. He is the chief spiritual officer of The Ken Blanchard Companies, a full-service global management training and development company that he and his wife, Dr. Marjorie Blanchard, founded in 1979.
Loading...
or support indie stores by buying on