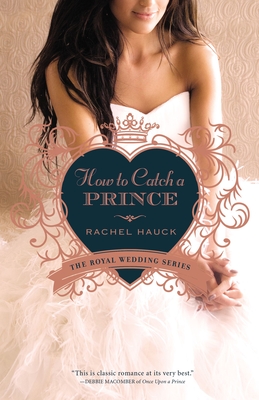 How to Catch a Prince (Royal Wedding #3) (Paperback)

Behind him, beside him, before him, the synchronized cathedral bells began to ring out.

Then she said it first. The words his heart burst to share. "I love you, Stephen. You are my true prince."

An American heiress and a crown prince seem destined to be together. Will the devastation of war keep them apart forever?

American heiress Corina Del Rey caught her prince once. But the tragedy of war kept her too long in a fog of grief. Now she's shifting her life forward, reigniting her career as a journalist. Still, nothing can relieve her of the secret and the love she carries in her soul.

Prince Stephen of Brighton is one of the world's most eligible bachelors and a star rugby player, trying to make sense of his life. His days in Afghanistan with the Royal Air Command will mark him forever. And he can't seem to shake their dark shadow.

But when his brother, King Nathaniel, confronts him with a document the prince thought long buried and forgotten, Stephen is forced to face the pain of his past and the love he left behind.

With a little heavenly help, Prince Stephen and Corina embark on a journey of truth. But when the secrets are revealed, can they overcome and find love again?

"Hauck writes a feel-good novel that explores the trauma and love of the human heart . . . an example of patience and sacrifice that readers will adore." --RT Book Reviews, 4 stars

Rachel Hauck is an award winning, bestselling author. Her book, The Wedding Dress, was named Inspirational Novel of the Year by Romantic Times, and Once Upon A Prince was a Christy Award finalist. Rachel lives in central Florida with her husband and two pets and writes from her ivory tower.
or support indie stores by buying on
Copyright © 2020 American Booksellers Association