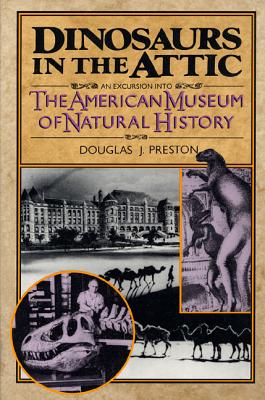 Dinosaurs in the Attic (Paperback)

An Excursion into the American Museum of Natural History

Dinosaurs in the Attic is a chronicle of the expeditions, discoveries, and scientists behind the greatest natural history collection every assembled. Written by former Natural History columnist Douglas J. Preston, who worked at the American Museum of Natural History for seven years, this is a celebration of the best-known and best-loved museum in the United States.

Douglas Preston is the co-author with Lincoln Child of the celebrated Pendergast series of novels, including such best-selling titles as Fever Dream, The Book of the Dead, The Wheel of Darkness, and Relic, which became a number one box office hit movie. His solo novels include the New York Times bestsellers Impact, Blasphemy, The Codex, and Tyrannosaur Canyon. His most recent nonfiction book, The Monster of Florence, is being made into a film starring George Clooney. Preston is an expert long-distance horseman, a member of the elite Long Riders Guild, and a Fellow of the Royal Geographical Society. He has travelled to remote parts of the world as an archaeological correspondent for The New Yorker. He also worked as an editor and writer at the American Museum of Natural History in New York and taught nonfiction writing at Princeton University. Preston is the Co-president of International Thriller Writers, and serves on the Governing Council of the Authors Guild.

Praise For Dinosaurs in the Attic: An Excursion into the American Museum of Natural History…

“Conveys the feeling of excitement and unflagging curiosity of those working behind the scenes to add to mankind's knowledge of the natural world.” —Lorin Nevling, Jr., Director Emeritus, Field Museum of Natural History, Chicago

“Dinosaurs in the Attic is not just chronicle, or even history-it is literature, and a damn good read!” —Charles R. Crumly, Museum of Comparative Zoology, Harvard University

“The raucous and heroic history of one of America's best-loved museums...a beguiling book.” —Chicago Tribune