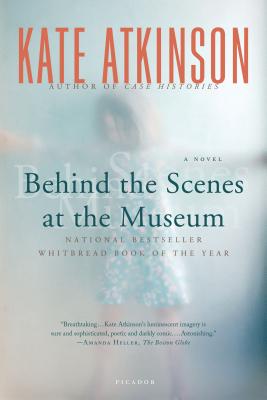 Behind the Scenes at the Museum

A deeply moving family story of happiness and heartbreak, Behind the Scenes at the Museum is bestselling author Kate Atkinson's award-winning literary debut.

Winner of the Whitbread Book of the Year

Ruby Lennox begins narrating her life at the moment of conception, and from there takes us on a whirlwind tour of the twentieth century as seen through the eyes of an English girl determined to learn about her family and its secrets. Kate Atkinson's first novel is "a multigenerational tale of a spectacularly dysfunctional Yorkshire family and one of the funniest works of fiction to come out of Britain in years" (The New York Times Book Review).


Praise For Behind the Scenes at the Museum: A Novel…

“Remarkable . . . A multigenerational tale of a spectacularly dysfunctional Yorkshire family and one of the funniest works of fiction to come out of Britain in years.” —Ben Mcintryre, The New York Times Book Review

“Scoundrels, malcontents, misfits, and cheats. Every family has them, though seldom are they handled with the winsome wit and wisecrackery that make Behind the Scenes at the Museum such a smart and funny read.” —The Washington Times

Kate Atkinson is the author of a short-story collection, Not the End of the World, and critically acclaimed novels including Human Croquet, Case Histories and One Good Turn. She lives in Edinburgh, UK.

What do cupboards have to do with the story?

More than one reviewer compared Behind the Scenes at the Museum to Tristram Shandy and to the works of Marcel Proust and Charles Dickens. What might these novels have in common? How does Kate Atkinson update or expand upon the earlier books’ use of narration and history?

One of Atkinson’s innovations is her use of footnotes. Why do you think she adopted this nonfiction technique in a novel?

Although this novel is very much about a specific time and place, it has been embraced by audiences in twelve countries, in as many languages. What gives Behind the Scenes at the Museum such a universal appeal?

What is the meaning of the book’s title?

What other fictional narrators does Ruby Lennox bring to mind?

What does Behind the Scenes at the Museum say about women’s roles and opportunities in the family and in the world at large? What do the four generations of women in Ruby’s family have in common?

Behind the Scenes at the Museum generated controversy in England when a critic called it “anti-family.” How would you defend the book against this charge? What other novels, now considered classics, might have had to face this sort of accusation?