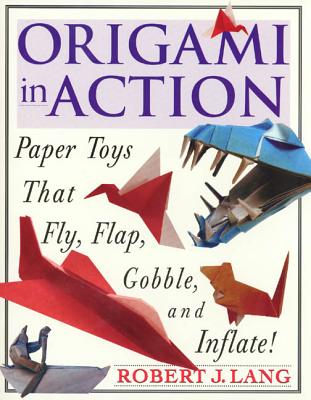 Robert J. Lang shares his gift for creativity with Origami in Action, featuring thirty-nine action paper folded models that are as animated as they are exquisite. Birds flap their wings, guitarists strum, and Tyrannosaurus Rexes roar.

Step-by-step diagrams, instructions, and photographs of the finished projects will show you how to make origami that are both decorative and interactive.

From simple creations to advanced works of art, Origami in Action will show you how to create unique and original origami toys and decorations.


Praise For Origami In Action: Paper Toys That Fly, Flag, Gobble and Inflate!…

“Robert Lang's remarkable origami creations are joined here by the delightful novelties of other contemporary designers, while traditional favorites find themselves varied and developed in unexpected ways. Origami in Action holds much folding pleasure for beginner and expert alike.” —Sam Randlett

Robert J. Lang is one of the most respected origami designers in the world. He is the author of The Complete Book of Origami and Origami Zoo (written with Steven Weiss). He lives in Altadena, California.
Loading...
or support indie stores by buying on