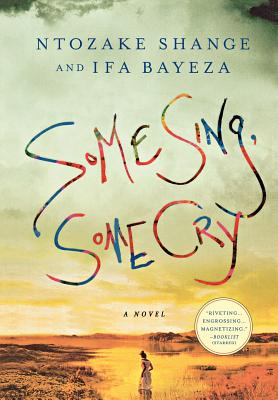 Some Sing, Some Cry

Award-winning writer Ntozake Shange and real-life sister, award-winning playwright Ifa Bayeza achieve nothing less than a modern classic in this epic story of the Mayfield family. Opening dramatically at Sweet Tamarind, a rice and cotton plantation on an island off South Carolina's coast, we watch as recently emancipated Bette Mayfield says her goodbyes before fleeing for the mainland. With her granddaughter, Eudora, in tow, she heads to Charleston. There, they carve out lives for themselves as fortune-teller and seamstress. Dora will marry, the Mayfield line will grow, and we will follow them on an journey through the watershed events of America's troubled, vibrant history—from Reconstruction to both World Wars, from the Harlem Renaissance to Vietnam and the modern day. Shange and Bayeza give us a monumental story of a family and of America, of songs and why we have to sing them, of home and of heartbreak, of the past and of the future, bright and blazing ahead.


Praise For Some Sing, Some Cry…

"Lyrical... Think of it as Roots with a treble clef—a confident, lively account of love, art and what falls between."

"Vibrant... Some Sing, Some Cry is Shange and Bayeza at their poetic best."  --Essence "Solid gold... Ntozake Shange and her sister, Ifa Bayeza, partner to write a lyrical and epic novel."  --Ebony

“Revered poet, playwright, and novelist Shange teams up with her award-winning playwright sister Bayeza in this encompassing historical saga of African American life. In its riveting dramatization of the promise of emancipation, the brutality of the Reconstruction, the baroque cruelty of the Jim Crow era, all the way to the possibilities of the digital age, this bittersweet tale of seven generations in a family of mixed blood and musical genius weaves together essential historical  facts and profound emotional truths. With music as a sustaining force, Shange and Bayeza’s epic of courage, improvisation, and transcendence is glorious in its scope, lyricism, and spectrum of yearnings, convictions, and triumphs.”

“A sweeping African-American saga animating 200 years of history through the voices of seven generations of the Mayfield family's women, beginning with Elizabeth (Ma Bette), a freed slave, and her granddaughter Eudora. Their fate and that of their progeny follows historical events from the Jim Crow South to the civil rights movement with tragedy and triumph. This is a complex poetic treatise on race, culture, love, and family, the use of regional vernacular, dialect, and pure song, resulting in a provocative fictional history.”

“If there are shoulders modern African-American women's literature stands upon they belong to Ntozake Shange who revolutionized theater and literature with her iconic work for colored girls who have considered suicide/when the rainbow is enuf  in the 1970's. Any of us writing today are inheritors of her genius. Some Sing, Some Cry will show her to be as potent and irrepressible a force as she was thirty years ago.”

“In this epic saga, the sister-sister author combination of Bayeza and Shange offers a richly detailed and boldly colored account of one family’s experience in slavery and its legacies for the generations that followed. Some Sing, Some Cry is both moving and arresting.”

–Annette Gordon-Reed, author of the Pulitzer Prize and National Book Award winner The Hemingses of Monticello: An American Family

NTOZAKE SHANGE is a renowned playwright, poet, and novelist. Her works include the Obie Award-winning "for colored girls who have considered suicide/when the rainbow is enuf," "Betsey Brown," " Liliane "and "Sassafrass, Cypress & Indigo." Among her honors and awards are fellowships from the Guggenheim Foundation and the Lila Wallace-Reader's Digest Fund and a Pushcart Prize. A graduate of Barnard and recipient of a Masters in American Studies from University of Southern California, she currently lives in Brooklyn, New York. IFA BAYEZA is an award-winning playwright, producer, and conceptual theater artist. Her works for the stage include "Amistad Voices," " Club Harlem," " Kid Zero," " Homer G & the Rhapsodies," and "The Ballad of Emmett Till," winner of the 2008 Edgar Award for Best Play and a 2007 Eugene O'Neill Playwrights Conference fellowship. A graduate of Harvard University, Bayeza is a board member of the SonEdna Literary Foundation. She lives in Chicago.
Loading...
or
Not Currently Available for Direct Purchase