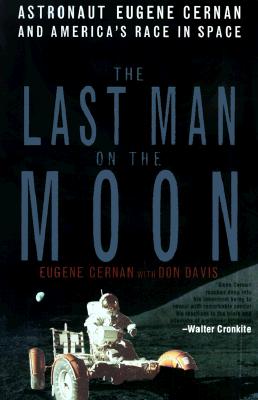 The Last Man on the Moon

Eugene Cernan is a unique American who came of age as an astronaut during the most exciting and dangerous decade of spaceflight. His career spanned the entire Gemini and Apollo programs, from being the first person to spacewalk all the way around our world to the moment when he left man's last footprint on the Moon as commander of Apollo 17.

Between those two historic events lay more adventures than an ordinary person could imagine as Cernan repeatedly put his life, his family and everything he held dear on the altar of an obsessive desire. Written with New York Times bestselling author Don Davis, this is the astronaut story never before told - about the fear, love and sacrifice demanded of the few men who dared to reach beyond the heavens for the biggest prize of all - the Moon.


Praise For The Last Man on the Moon: Astronaut Eugene Cernan and America's Race in Space…

"This is an exciting, insider's take on what it was like to become one of the first humans in space." --Publishers Weekly
"Eugene Cernan offers unique insight...[he's] experienced it all" --African Sun Times
"A fascinating book...Cernan pulls few punches." --Charlotte Observer
"Refreshingly told...written as though it's been days since he went to space, not decades." --St. Petersburg Times
"[with] thrilling highlights, this is a book not just about space flight but also about the often brutal competition that went on between the US and the Soviet Union." --Washington Times
"With the feel of a story recalled among friends, this is an appealingly down to earth account from the last man to walk on the moon. No advanced physics, no scientific mumbo-jumbo. Just a thoroughly engrossing recollection of Cernan's crucial role in the conquest of space. I loved the book." --Ron Howard, Director, Apollo 13
"I know the American people will learn a great deal from this book. I hope they learn a lot more about astronaut Gene Cernan, my friend, a man of courage and dedication." --President George Bush

Eugene Cernan is an aerospace executive, consultant and lecturer. He lives in Houston.Don Davis was a newspaper and wire service correspondent whose assignments ranged from Selma to Saigon and Cape Kennedy to the White House before becoming a "New York Times" bestselling author. He lives in Colorado with his wife, Robin.
Loading...
or
Not Currently Available for Direct Purchase