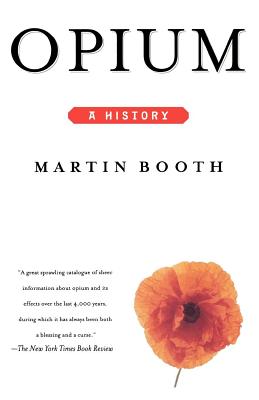 Known to mankind since prehistoric times, opium is arguably the oldest and most widely used narcotic. Opium: A History traces the drug's astounding impact on world culture-from its religious use by prehistoric peoples to its influence on the imaginations of the Romantic writers; from the earliest medical science to the Sino-British opium wars. And, in the present day, as the addict population rises and penetrates every walk of life, Opium shows how the international multibillion-dollar heroin industry operates with terrifying efficiency and forms an integral part of the world's money markets.

In this first full-length history of opium, acclaimed author Martin Booth uncovers the multifaceted nature of this remarkable narcotic and the bittersweet effects of a simple poppy with a deadly legacy.

Martin Booth (1944-2004) was the bestselling author of novels including Hiroshima Joe, Islands of Silence, and The Industry of Souls, which was shortlisted for the Booker Prize. Another novel, A Very Private Gentlemen, was adapted into the 2010 movie, The American, starring George Clooney. He also wrote several nonfiction books, including Cannabis: A History, Opium: A History, and the memoir Golden Boy: Memories of a Hong Kong Childhood. Booth was born in England, but spent much of his childhood in Hong Kong, a location that would deeply inspire his writing. He moved back to England at the age of 20, and started his literary career as a poet. He worked as a schoolmaster, a job he held until 1985, when the success of Hiroshima Joe allowed him to devote himself full-time to his writing. At the time of his death in 2004, he was living in Devon, England.

Praise For Opium: A History…

“In writing this exhaustively researched history...Booth brings us that much closer to understanding-and thereby conquering-the most tenacious of human conditions.” —Amazon.com

“The book's wealth of detail is remarkable.” —The Economist

“Opium is of great value for its thoroughness, and it is briskly written...Each chapter [is] a ball of opium with an explosive charge.” —The Boston Globe

“Booth takes us from P. somniferum to 'black gold', compellingly documenting the influential role of the opiate trade throughout history.” —Publishers Weekly

“From the subtleties of Chinese history to the complexities of GoldenTriangle narco-nationalism, ...Booth shows us a sure grasp of his material and manages to pull the innumberable and far-flung threads...neatly together.” —Kirkus Reviews