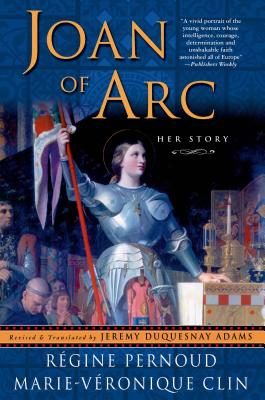 In an exquisite English translation from the bestselling French edition, Joan of Arc: Her Story now appears for American readers. From the French peasant girl who led an army to the icon burned at the stake, Joan has been a blank slate on which thousands have written. Pernoud and Clin clear away the myths so that modern readers can see Joan as she was and include a glossary of important individuals, historical events and interpretations of Joan through the ages. Joan of Arc: Her Story is the thrilling life of a woman who obsesses us even to this day.


Praise For Joan of Arc: Her Story…

“Adams has performed a great service by translating and revising this best-selling French chronicle of the life and legacy of Joan of Arc.” —Booklist (starred review)

“This Joan of Arc makes you want to be there to witness it all!” —Le Monde

Règine Pernoud, a pioneer women's historian, was a member of the French Academy and founder of the Centre Jeanne d'Arc in Orleans. She is co-author of Joan of Arc: Her Story.

Marie-Vèronique Clin is Director of the Museum of the History of Medicine in Paris. She is co-author of Joan of Arc: Her Story with Regine Pernoud.