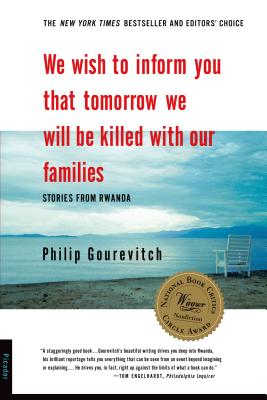 We Wish to Inform You That Tomorrow We Will Be Killed with Our Families is the winner of the National Book Critics Circle Award for Nonfiction.

An unforgettable firsthand account of a people's response to genocide and what it tells us about humanity.

This remarkable debut book from Philip Gourevitch chronicles what has happened in Rwanda and neighboring states since 1994, when the Rwandan government called on everyone in the Hutu majority to murder everyone in the Tutsi minority. Though the killing was low-tech--largely by machete--it was carried out at shocking speed: some 800,000 people were exterminated in a hundred days. A Tutsi pastor, in a letter to his church president, a Hutu, used the chilling phrase that gives Gourevitch his title.

With keen dramatic intensity, Gourevitch frames the genesis and horror of Rwanda's "genocidal logic" in the anguish of its aftermath: the mass displacements, the temptations of revenge and the quest for justice, the impossibly crowded prisons and refugee camps. Through intimate portraits of Rwandans in all walks of life, he focuses on the psychological and political challenges of survival and on how the new leaders of postcolonial Africa went to war in the Congo when resurgent genocidal forces threatened to overrun central Africa.

Can a country composed largely of perpetrators and victims create a cohesive national society? This moving contribution to the literature of witness tells us much about the struggle everywhere to forge sane, habitable political orders, and about the stubbornness of the human spirit in a world of extremity.


Praise For We Wish to Inform You That Tomorrow We Will Be Killed with Our Families: Stories from Rwanda…

“[It is the] sobering voice of witness that Gourevitch has vividly captured in his work.” —Wole Soyinka, The New York Times Book Review

“[Gourevitch] has the mind of a scholar along with the observative capacity of a good novelist, and he writes like an angel. This volume establishes him as the peer of Michael Herr, Ryszard Kapuscinski, and Tobias Wolff. I think there is no limit to what we may expect from him.” —Robert Stone

“A sobering, revealing, and deeply thoughtful chronicle.” —The Boston Globe

“The most important book I have read in many years . . . [Gourevitch] examines [the genocidal war in Rwanda] with humility, anger, grief and a remarkable level of both political and moral intelligence.” —Susie Linfield, Los Angeles Times

“Shocking and important . . . clear and balanced . . . the voice in this book is meticulous and humane.” —Michael Pearson, The Atlanta Journal-Constitution

“Astonishing . . . [Gourevitch] is masterful at placing the unspeakability of mass murder into actual people's mouths and inhabiting it in actual people's stories.” —Mark Gevisser, Newsday

“Unsettlingly beautiful . . . brilliant . . . this is a staggeringly good book . . . [It] should be on bookshelves forever.” —Tom Engelhardt, The Philadelphia Inquirer

Philip Gourevitch is a long-time staff writer at The New Yorker and a former editor of The Paris Review. He is the author of Standard Operating Procedure, A Cold Case, and We Wish to Inform You That Tomorrow We Will Be Killed with Our Families, which won numerous honors, including the National Book Critics Circle Award, and was counted by The Guardian among the 100 best nonfiction books of all time.
Loading...
or support indie stores by buying on