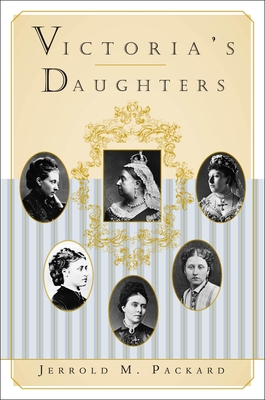 Five women who shared one of the most extraordinary and privileged sisterhoods of all time...

Vicky, Alice, Helena, Louise, and Beatrice were historically unique sisters, born to a sovereign who ruled over a quarter of the earth's people and who gave her name to an era: Queen Victoria. Two of these princesses would themselves produce children of immense consequence. All five would face the social restrictions and familial machinations borne by ninetheenth-century women of far less exalted class.

Researched at the houses and palaces of its five subjects-- in London, Scotland, Berlin, Darmstadt, and Ottawa-- Victoria's Daughters examines a generation of royal women who were dominated by their mother, married off as much for political advantage as for love, and passed over entirely when their brother Bertie ascended to the throne. Packard, an experienced biographer whose last book chronicled Victoria's final days, provides valuable insights into their complex, oft-tragic lives as scions of Europe's most influential dynasty, and daughters of their own very troubled times.

Jerrold Packard's books include the best-selling Victoria's Daughters, the life stories of the five princesses born to Britain's longest-reigning monarch; Sons of Heaven, a chronicle of Japan's monarchy over fourteen centuries; and American Nightmare, the history of Jim Crow and the racial torment that America endured for more than a hundred years in the wake of the Civil War.  Mr. Packard lives in Vermont.

“Packard's narrative is accessible, unpretentious, and solidly written....He manages to treat historical events succinctly while emphasizing the princesses' individual lives and family relationships, their talents in music and art, their patronage of schools and hospitals, and their pioneering advocacy of women's education and employment.” —Publishers Weekly
or support indie stores by buying on
Copyright © 2020 American Booksellers Association