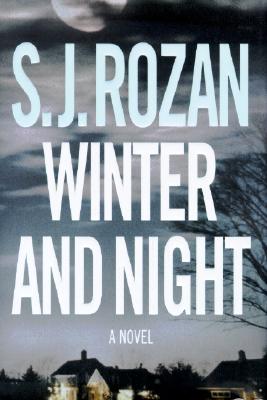 From the critically acclaimed, award-winning S. J. Rozan comes her finest novel to date - an explosive novel about the corrosive power of secrets and corruption in a small town.

In the middle of the night, private investigator Bill Smith is awakened by a call from the NYPD. They're holding a 15-year-old kid named Gary -- a kid Bill knows. But before Bill can find out what is going on, Gary escapes Bill's custody into the dark night and unfamiliar streets. Bill, with the help of his partner Lydia Chin, tries to find the missing teen and uncover what it is that led him so far from home. Tracking Gary's family to a small town in New Jersey, Bill finds himself in a town where nothing matters but high school football, where the secrets of the past - both the town's and Bill's own - threaten to destroy the present. And if Bill is to have any chance of saving Gary and preventing a tragedy, he has to both unravel a long buried crime and confront the darkness of his own past. Winter and Night is the winner of the 2003 Edgar Award for Best Novel.


Praise For Winter and Night: A Bill Smith/Lydia Chin Novel…

"Lydia Chin and Bill Smith remain one of the very best private-eye duos in the genre, and this installment of Rozan's highly readable and most entertaining series lives up to the superlatives we have heaped upon its predecessors.... As before, Rozan delivers strong characters, deft plotting, and a hard-driving narrative. We'll say it again: don't miss this one."--Booklist (Starred Review) "Disturbing, suspenseful."--Publishers Weekly "Rozan’s ... masterly take on one of the genre’s classic tropes—the sins of the fathers waiting to bear poisonous fruit for their children—is worthy of that trope’s own spiritual father, Ross Macdonald."--Kirkus Reviews (Starred Review) "With a strong, sure hand, S.J. Rozan tells a hard-hitting tale that rings with authenticity."--RT Book Reviews

S. J. Rozan is the author of seven previous novels, most recently "Reflecting the Sky." She has won both the Shamus Award for Best Novel (for "Concourse") and the Anthony Award for Best Novel (for "No Colder Place") and was an Edgar Award finalist. Rozan is an architect, born and currently lives in New York City.
Loading...
or
Not Currently Available for Direct Purchase