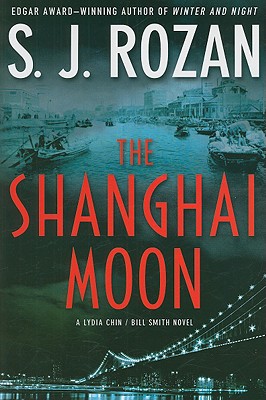 “S.J. Rozan shines in her latest Lydia Chin/Bill Smith novel. Lydia is working with someone else to track down jewelry stolen during WWII when her new partner is murdered -- and Bill steps in to help her. It's a poignant mystery about the effects of a troubled time.”
— Linda Dewberry, Whodunit? Books, Olympia, WA
View the List

With The Shanghai Moon, S. J. Rozan returns to her award-winning, critically acclaimed, and much-loved characters Lydia Chin and Bill Smith in the first new novel in the series in seven years. Estranged for months from fellow P.I. Bill Smith, Chinese-American private investigator Lydia Chin is brought in by colleague and former mentor Joel Pilarsky to help with a case that crosses continents, cultures, and decades.   In Shanghai, excavation has unearthed a cache of European jewelry dating back to World War II, when Shanghai was an open city providing safe haven for thousands of Jewish refugees. The jewelry, identifed as having belonged to one such refugee - Rosalie Gilder - was immediately stolen by a Chinese official who fled to New York City. Hired by a lawyer specializing in the recovery of Holocaust assets, Chin and Pilarsky are to find any and all leads to the missing jewels.However, Lydia soon learns that there is much more to the story than they've been told: The Shanghai Moon, one of the world's most sought after missing jewels, reputed to be worth millions, is believed to have been part of the same stash. Before Lydia can act on this new information, Joel Pilarsky is murdered, Lydia is fired from the case, and Bill Smith finally reappears on the scene. Now Lydia and Bill must unravel the truth about the Shanghai Moon and the events that surrounded its disappearance sixty years ago during the chaos of war and revolution, if they are to stop more killings and uncover the truth of what is going on today.

S.J. ROZAN was born and raised in the Bronx and is a long-time Manhattan resident. An architect for many years, she is now a full-time writer. Her critically acclaimed, award-winning novels and stories have won most of crime fiction's greatest honors, including the Edgar, Anthony, Shamus, Macavity and the Nero Award.

Praise For The Shanghai Moon: A Bill Smith/Lydia Chin Novel…

"To read S.J. Rozan is to experience the kind of pure pleasure only a master can deliver."
--Dennis Lehane "With Winter and Night, S. J. Rozan paints with the full pallette of the human heart, using depth, detail, and nuance of character I haven't seen since Raymond Chandler (Yes, I mean it.)" -- Robert Crais "Featuring two of my favorite characters in crime fiction, Bill Smith and Lydia Chin, Winter and Night is a chilling and compelling look at the dark roots of violence among American teens. The most intense and topical works from one of America's finest crime writers today."-- Linda Fairstein "engrossing storytelling ... As 'The Shanghai Moon' demonstrates, there's plenty of possibility lurking in the old missing-gems plot. It just takes a master like S.J. Rozan to restore the luster of a classic." --Maureen Corrigan, The Washington Post