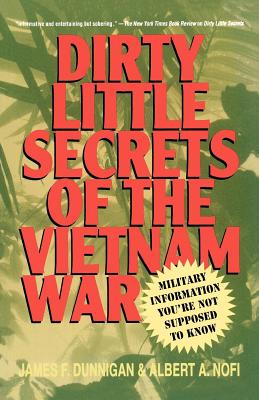 Military Information You're Not Supposed to Know

James F. Dunnigan and Albert A Nofi's Dirty Little Secrets of the Vietnam War allows us to see what really happened to American forces in Southeast Asia, separating popular myth from explosive reality in a clear, concise manner.

Containing more than two hundred examinations of different aspects of the war, the book questions why the American military ignored the lessons taught by previous encounters with insurgency forces; probes the use of group think and mind control by the North Vietnamese; and explores the role technology played in shaping the way the war was fought. Of course, the book also reveals the "dirty little secrets," the truth behind such aspects of the conflict as the rise of the Montagnard mercenaries-the most feared group of soldiers participating in the secret war in Laos-and the details of the hidden struggle for the Ho Chi Minh Trail.

With its unique and perceptive examination of the conflict, Dirty Little Secrets of the Vietnam War offers a critical addition to the library of Vietnam War history.


Praise For Dirty Little Secrets of the Vietnam War: Military Information You're Not Supposed to Know…

James Dunningan is an adviser and lecturer to the State Department, Army War College, National Defense University, CIA, and many other institutions. Author of the classic military manual, How to Make War, Dunnigan served as NBC's Gulf War analyst and is the author of fifteen books. He lives in New York City.

Albert A. Nofi and James F. Dunnigan are the authors of hundreds of books and articles on military affairs. Nofi is the editor of the series The Great Campaigns of Military History.