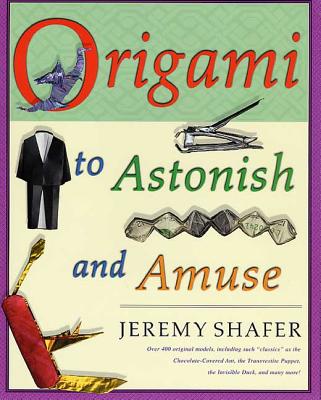 Origami to Astonish and Amuse

Over 400 Original Models, Including Such "Classics" as the Chocolate-Covered Ant, the Transvestite Puppet, the Invisible Duck, and Many More!

Imagine folding a piece of paper into nail clippers that really work, or a Swiss Army knife that actually opens, or a surfer on a wave that crashes when the surfer is slid forward. These are just a few of the amazing, interactive paper folding projects to be found in Jeremy Shafer's Origami to Astonish and Amuse.

Featuring hundreds of entertaining models and folding ideas, ranging from amazingly simple to ridiculously complex, this inspiring how to do origami book is a perfect fun arts and crafts book for creating toys and decorations the whole family can enjoy--a perfect gift book to jump start creativity!


Praise For Origami to Astonish and Amuse: Over 400 Original Models, Including Such "Classics" as the Chocolate-Covered Ant, the Transvestite Puppet, the Invisible Duck, and Many More!…

“A brilliant and bizarre take on art and life.” —Peter Engel, author of Folding the Universe

Jeremy Shafer has been folding for fifteen years and has created hundreds of original models, each folded from one piece of paper, without cutting. He has been published in major origami journals in the United States, Japan, and the United Kingdom, and has exhibited his work at seven OrigamiUSA conventions. He is a member of the Friends of Origami Center of America and is the editor of the BARF (Bay Area Rapid Folders) newsletter. He lives in Berkeley, California.
or support indie stores by buying on