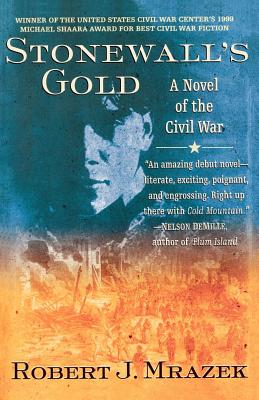 A Novel of the Civil War

Stonewall's Gold is an adventure story for readers of all ages in the classic tradition of Treasure Island and The Red Badge of Courage. Combining a fascinating and gripping narrative with a portrait of life in the Civil War-era South, it is also the moving story of a boy on the edge of manhood, taking on difficult challenges that force him to confront the world for the first time.

The year of 1864 is a difficult time to be living in the Appalachian Mountains of Virginia. The Civil War is drawing to a close and, under the orders of General Sheridan, Union troops have laid waste to the countryside. Against this bleak backdrop, Jamie Lockhart's mother takes on a boarder to help her eke out a living until her husband returns from the war.

Soon, someone begins desecrating local soldier's graves, and Jamie, an intrepid fifteen-year-old, discovers that their boarder is the culprit. Confronted, the boarder assaults Jamie's mother; defending her, Jamie kills him. In his personal effects Jamie discovers the item he was looking for in the graveyard, a cryptic map to Stonewall's gold. Thus begins Jamie's quest.

Along the way, Jamie is faced with the best and the worst in human nature, and meets a young girl and falls in love for the first time. He becomes privy to the hidden politics behind the war when he stumbles upon escaped slaves on the Underground Railroad, and he is also forced to confront the ugly realities of war and the absurdity of the lost cause in the final days of the conflict.

A ripping adventure yarn, a moving coming-of-age tale, and a fascinating portrait of the difficulty of life in the Appalachians at the end of the Civil War, Stonewall's Gold is a compelling novel that is certain to appeal to teacher and student alike.


Praise For Stonewall's Gold: A Novel of the Civil War…

“A superb piece of literature, rich in texture and of surpassing literary merit. This book is destined to become one of the great classics of Civil War literature.” —Robert K. Krick, author of Stonewall Jackson at Cedar Mountain and Lee's Colonel

“A priceless novel . . . Mrazek joins a handful of writers who have mined the vast field of the Civil War to produce a must-read book . . . A great tale.” —The Washington Times

“More than a fast-paced adventure story; it is also a tale of the horrors of war, and of the last days of the Confederacy.” —School Library Journal

“Stonewall's Gold hits paydirt . . . A novel of suspense and intrigue woven into the fabric of Civil War history.” —Atlanta Journal-Constitution

“A simple tale almost magically rendered . . . On the surface it is a whopping good adventure yarn, but Mrazek's attention to detail and research of the era turn the story into a beguiling sketch of the lives of average Americans during our nation's saddest period.” —The Denver Post

“A remarkable book that is a welcome addition to the huge, ever-growing body of Civil War literature . . . The twists and turns in the plot are enough to keep you turning the pages, but it's the author's ability to recreate the haunting sights and sounds of war-torn Virginia in the midst of the Confederacy's death throes that lifts this book to the level of literature. Indeed, it evokes the sense of the young man rising to a new level of maturity through a trial by fire, like Stephen Crane's classic Civil War novel The Red Badge of Courage.” —The Hill

“An amazing debut novel--literate, exciting, poignant, and engrossing. Right up there with Cold Mountain.” —Nelson DeMille, author of Plum Island

“A rattling good adventure story that also has important things to say about the hard, vicious nature of the Civil War during its final months in the Shenandoah Valley.” —James M. McPherson, Pulitzer Prize-winning author of Battle Cry of Freedom

Robert J. Mrazek lives and writes in Washington, D.C., and Maine. A former member of Congress, he coauthored the law that saved the Manassas battlefield from being bulldozed into a giant shopping center.
Loading...
or support indie stores by buying on