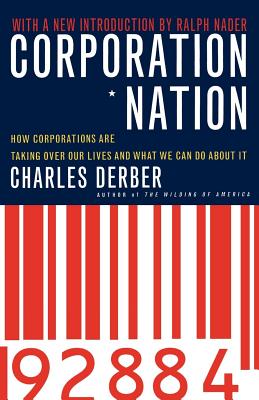 Foreword by Ralph Nader. In Corporation Nation Derber addresses the unchecked power of today's corporations to shape the way we work, earn, buy, sell, and think—the very way we live. Huge, far-reaching mergers are now commonplace, downsizing is rampant, and our lines of communication, news and entertainment media, jobs, and savings are increasingly controlled by a handful of global—and unaccountable—conglomerates. We are, in effect, losing our financial and emotional security, depending more than ever on the whim of these corporations. But it doesn't have to be this way, as this book makes clear. Just as the original Populist movement of the nineteenth century helped dethrone the robber barons, Derber contends that a new, positive populism can help the U.S. workforce regain its self-control.

Drawing on core sociological concepts and demonstrating the power of the sociological imagination, he calls for revisions in our corporate system, changes designed to keep corporations healthy while also making them answerable to the people. From rewriting corporate charters to altering consumer habits, Derber offers new aims for businesses and empowering strategies by which we all can make a difference.


Praise For Corporation Nation: How Corporations are Taking Over Our Lives -- and What We Can Do About It…

“Sophisticated, vividly written, and convincing . . . A work of generous imagination that looks wisely to the future and lays out a sober plan of action for Americans committed to a truly just and equitable social order.” —Jonathan Kozol, author of Amazing Grace and Savage Inequalities

“It would be difficult to overstate the importance of the issues addressed in this thoughtful and well-informed study of modern corporations. A substantial and very timely contribution.” —Noam Chomsky

“An important book in the current economic boom, Corporation Nation will seem prophetic the next time the economy cycles into a recession or depression.” —George Ritzer, author of The McDonaldization of America

“A rising tide should lift all boats. But too often in our modern society, as Charles Derber skillfully points out, millions of Americans are left out or left behind . . . Derber's analysis and recommendations should be read and heeded by all who believe that free enterprise can be fair enterprise too.” —Senator Edward M. Kennedy

“An invaluable, on-target contribution to redefining the political debate. Corporation Nation provides a depth of data and analysis useful in building a case for change. A guiding beacon for those committed to restoring democracy and economic justice.” —David Korten, author of When Corporations Rule the World

“This exceptional book has the best description anywhere of how corporations erased from public memory the notion that the public can control them. Must reading.” —Business Ethics

“Americas in deep trouble--corporate oligopoly is seizing our money and stealing our humanity, too. Derber (Sociology, Boston College) diagnoses the problem and prescribes a cure. Writing 100 years ago at the height of the Gilded Age, John P. Davis concluded his seminal study, Corporations, by noting that citizenship 'has been largely metamorphosed into membership in corporations and patriotism into fidelity to them.' Now the situation is no better, claims Derber. He says we've entered another Gilded Age at the turn of a century just as problematic as the last one. His tract compiles complaints against big business and how it blights our lives. Acquiescent politicians, autocratic CEOs, and huge mergers enable corporations to act as a new branch of government, and we confront businesses bigger than nations. The top 200 transnational companies enjoy more income than four fifths of the world's population; their combined income is greater than the combined economies of 182 countries. Corporate plunder thrives; countervailing forces are weak. It's time to rethink what a corporation is supposed to do beyond rewarding shareholders. It's time to fix things. Derber's answer: populism. But not the hayseed, xenophobic populism of William Jennings Bryan, nor the prejudiced populism of Father Coughlin, nor the reactionary populism of Pat Buchanan. Instead, the professors sermon considers and reconsiders what he calls 'positive populism.' This new version of an old idea is global, embracing labor, grassroots community groups, multiculturalism, and the environmentalist agenda in a broad movement where corporations must serve people, not the reverse.” —Kirkus Reviews

Charles Derber is professor of sociology at Boston College and former director of its graduate program on social economy and social justice. He is a prolific scholar in the field of politics, economy, international relations, and U.S. culture. He has written 17 internationally acclaimed books and several major research grants, as well as hundreds of scholarly articles, magazine essays, and newspaper columns.
Derber’s books include Capitalism: Should You Buy It? (With Yale Magrass; Paradigm Publishers, 2014); Sociopathic Society (Paradigm Publishers, 2013); Hidden Power: What You Need to Know to Save Our Democracy (Berrett-Koehler, 2005, translated into Korean), a bestseller in South Korea and nominated by the Independent Bookstores of the United States as one of the three best current affairs books in 2005; People Before Profit: The New Globalization in an Age of Terror, Big Money, and Economic Crisis (Picador, 2003, translated into Chinese, German, and British English);  Corporation Nation (St. Martin’s Press, 2000, translated into Chinese); The Pursuit of Attention (Oxford, 2000, translated into Polish); Power in the Highest Degree (with William Schwartz and Yale Magrass, Oxford, 1990); Greed to Green (Paradigm Publishers, 2010; translated into  Korean); and Marx’s Ghost, (Paradigm Publishers, 2011, translated into Chinese, Korean, and Tamil).
Derber espouses a public sociology that brings sociological perspectives to a general audience. Derber lectures widely at universities, companies, and community groups, and appears on numerous media outlets. His op-eds and essays appear in The New York Times, Newsday, The Boston Globe, International Herald Tribune, China’s People’s Daily , Truthout, and Tikkun, as well as other newspapers and online media, and he has been interviewed by Newsweek, Business Week, Time, and other news magazines. He speaks frequently on National Public Radio, on talk radio, and on television. His work has been reviewed by The New York Times, The Washington Post, The Boston Globe, Boston Herald, Washington Monthly, and numerous other magazines and newspapers.
Derber is also a life-long activist for social justice. In the spirit of the great sociologist C. Wright Mills, he believes in the responsibility of intellectuals to speak truth to power and to match words with action.
Derber is married and lives in Dedham, Massachusetts. He has a beautiful wheaten terrier named Mojo, who lives up to his name.

Ralph Nader has written, co-authored, and sponsored dozens of books, including Action for Change, The Big Boys: Power and Position in American Business, Canada Firsts, Taming the Giant Corporation, Verdicts on Lawyers, The Menace of Atomic Energy, Who's Poisoning America, Winning the Insurance Game, The Frugal Shopper, and his bestelling exposé of the auto industry, Unsafe at Any Speed. When not heading up the Green Party, he runs his advocacy work through the numerous citizen groups he has founded.