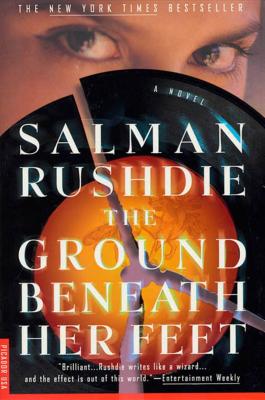 The Ground Beneath Her Feet


Praise For The Ground Beneath Her Feet: A Novel…

“No novelist currently writing in English does so with more energy, intelligence and allusiveness than Rushdie. Nearly every page of The Ground Beneath Her Feet offers something to arrest a devoted reader's attention: puns and wordplays galore . . . and enough literary echoes--of Joyce, Yeats, Frost, Dante, oh hell, of nearly everybody--to keep graduate students on the prowl through these pages for years.” —Paul Gray, Time

Salman Rushdie is the author of several novels, including Grimus, Midnight's Children, The Satanic Verses, Haroun and the Sea of Stories, The Moor's Last Sigh, The Ground Beneath Her Feet, Fury, and Shalimar the Clown. He has written collections of short stories, including East, West, and co-edited with Elizabeth West a collection of Indian literature in English, Mirrorwork. He has also published several works of nonfiction, among them The Jaguar Smile, Imaginary Homelands, The Wizard of Oz, and Joseph Anton, a memoir of his life under the fatwa issued after the publication of The Satanic Verses.
Loading...
or support indie stores by buying on