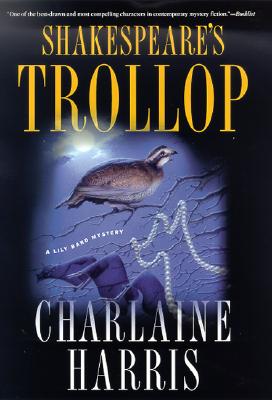 Welcome back to Shakespeare - a charming Arkansas town with endless back roads, an eclectic mix of residents, and a dollop of noir. Featuring cleaning woman/karate expert Lily Bard, Charlaine Harris's series puts a unique spin on the traditional cozy to create mysteries that "work on every level. The writing and plotting are first rate [and] Lily is appealing in her own prickly way" --Washington Times

In the latest installment, Lily discovers lifelong Shakespeare resident Deedra Dean murdered inside a car parked in a woodsy area outside town. Determined not to get involved, Lily wants to leave the police work to Sheriff Marta Schuster and her team of deputies, and concentrate on cleaning, high kicks, and her boyfriend Jack's impending visit. But when Deedra's notoriously promiscuous lifestyle provides an extensive list of suspects but very few clues, Lily has no choice but to resume the roll of amateur detective and join the investigation.

In this fourth book in Charlaine Harris's highly acclaimed and darkly compelling series, Lily Bard delivers a hard-hitting mix of Southern charm and street smarts, a combination so alluring that long-time readers and newcomers will be dying to visit Shakespeare again.

"Lily has such an engaging voice, full of pain and redemption."--Publishers Weekly "Lily Bard is an intriguing character, and readers will enjoy her attempts to make sense of human nature in general, and men in particular!"--RT Book Reviews "Solid entertainment."--Library Journal "Lily is a terrific character.... A supporting cast of quirky characters fully rendered in quick strokes will hold readers as surely as the complex resolution in this cozy on the bleeding edge of noir."--Booklist

Charlaine Harris is also the author of the acclaimed Aurora Teagarden mystery series, most recently "A Fool and His Honey." Born in Mississippi, she now lives in Magnolia, Arkansas.
Loading...
or
Not Currently Available for Direct Purchase