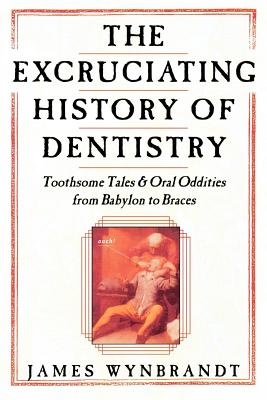 The Excruciating History of Dentistry

For those on both sides of the dreaded dentist's chair, James Wynbrandt has written a witty, colorful, and richly informative history of the art and science of dentistry. To all of those dental patients whose whine rises in tandem with that of the drill, take note: You would do well to stifle your terror and instead offer thanks to Apollonia, the patron saint of toothache sufferers, that you face only fleeting discomfort rather than the disfiguring distress, or slow agonizing death oft meted out by dental-care providers of the past. The transition from yesterday's ignorance, misapprehension, and superstition to the enlightened and nerve-deadened protocols of today has been a long, slow, and very painful process.

For example, did you know that:
*Among the toothache remedies favored by Pierre Fauchard, the father of dentistry, was rinsing the mouth liberally with one's own urine.
*George Washington never had wooden teeth. However, his chronic dental problems may have impacted the outcome of the American Revolution.
*Soldiers in the Civil War needed at least two opposing front teeth to rip open powder envelopes. Some men called up for induction had their front teeth extracted to avoid service.
*Teeth were harvested from as many as fifty thousand corpses after the Battle of Waterloo, a huge crop later used for dentures and transplants that became known as "Waterloo Teeth."


Praise For The Excruciating History of Dentistry: Toothsome Tales & Oral Oddities from Babylon to Braces…

"Soother of the Week: Just the thing you need to get through your next oral probing." -- Entertainment Weekly

"A breezy romp through the history of dentistry...both [dentists and patients] are in for a good laugh." -- Kirkus Reviews

James Wynbrandt's books include works on popular music, political humor, and genetic disorders. He's also written for television, radio, and the theater. He lives in New York City.
Loading...
or support indie stores by buying on