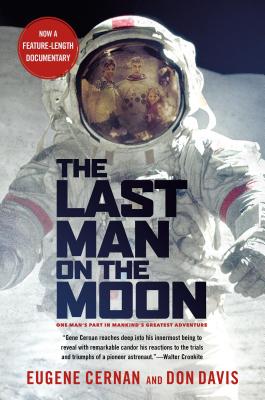 The Last Man on the Moon

The basis of the 2014 award-winning feature-length documentary! A revealing and dramatic look at the inside of the American Space Program from one of its pioneers.

Eugene Cernan was a unique American who came of age as an astronaut during the most exciting and dangerous decade of spaceflight. His career spanned the entire Gemini and Apollo programs, from being the first person to spacewalk all the way around our world to the moment when he left man's last footprint on the Moon as commander of Apollo 17.

Between those two historic events lay more adventures than an ordinary person could imagine as Cernan repeatedly put his life, his family and everything he held dear on the altar of an obsessive desire. Written with New York Times bestselling author Don Davis, The Last Man on the Moon is the astronaut story never before told - about the fear, love and sacrifice demanded of the few men who dared to reach beyond the heavens for the biggest prize of all - the Moon.


Praise For The Last Man on the Moon: Astronaut Eugene Cernan and America's Race in Space…

“This is an exciting, insider's take on what it was like to become one of the first humans in space.” —Publishers Weekly

“Refreshingly told...written as though it's been days since he went to space, not decades.” —St. Petersburg Times

“[with] thrilling highlights, this is a book not just about space flight but also about the often brutal competition that went on between the US and the Soviet Union.” —Washington Times

“With the feel of a story recalled among friends, this is an appealingly down to earth account from the last man to walk on the moon. No advanced physics, no scientific mumbo-jumbo. Just a thoroughly engrossing recollection of Cernan's crucial role in the conquest of space. I loved the book.” —Ron Howard, Director, Apollo 13

“I know the American people will learn a great deal from this book. I hope they learn a lot more about astronaut Gene Cernan, my friend, a man of courage and dedication.” —President George Bush

Eugene Cernan (1934-2017) flew in space three times, twice to the moon. He was the pilot of Gemini 9, lunar module pilot on Apollo 10, and commander of Apollo 17. He is a graduate of Purdue University and the U.S. Naval Post Graduate School and the recipient of numerous honorary degrees, military awards, and civilian honors, ranging from selection to the U.S. Space Hall of Fame to a television Emmy. He was chairman of the board of Johnson Engineering Corporation in Texas.

Donald A. Davis is co-author of New York Times bestseller Shooter: The Autobiography of the Top-Ranked Marine Sniper and author of Lightning Strike: The Secret Mission to Kill Admiral Yamamoto and Avenge Pearl Harbor. He lives outside Boulder, Colorado.
Loading...
or support indie stores by buying on